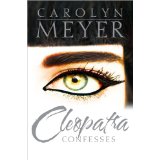 Most novels about Cleopatra focus on the tumultuous events of her adult life–the love affairs, the heart-break, the warfare, and ultimately, her tragic failure. This new novel by historical fiction author Carolyn Meyer zeroes in on Cleopatra’s early life, the unlikely journey of a third-born daughter whose rivalry with her siblings was nothing short of a deadly power struggle.

The book’s creator, CAROLYN MEYER, is the celebrated author of more than fifty books for young people, many of which have received awards and honors. She lives with her husband in Albuquerque, New Mexico. She’s also agreed to stop by and answer some questions here today.

I’ve written a number of novels about various queens of Europe–the Tudors, Catherine de’ Medici, Marie Antoinette, and (coming soon) Mary, Queen of Scots–and I was ready to try something completely different. Cleopatra immediately came to mind, and I was  fascinated, because–despite her great fame–so little is actually known about her.

What does she really have to confess?

Her relationships with her sisters and brothers  were shockingly confession-worthy.

What can young people learn from the Queen of Kings?

That being a queen is not a glamour job. And then there’s always somebody lurking nearby who wants to do you in.

Do you think she really loved either of her Roman consorts or were these affairs of political convenience?

I believe she was drawn to these powerful men on every level–physical, emotional, intellectual. For her, that equalled love. I don’t think she had other lovers, although her lovers certainly did–and wives, too.

Where do you come down on the question of how she died? Was it murder? Poison? Serpenticide?

I’ve read that being bitten by an asp/cobra is an extraordinarily painful and inefficient way to die, but that’s part of the Cleopatra legend, and so I’m sticking with it.

(Interviewer’s Note: I made the same choice for Lily of the Nile: A Novel of Cleopatra’s Daughter, and for the same reason, as explained in my article, How Did Cleopatra Really Die?)

What was the most surprising or confusing thing you learned about Cleopatra while writing this book?

One of the great mysteries surrounding Cleopatra is her physical appearance. The legend, again, paints her as exotically and erotically beautiful, but the only contemporary image, on a coin, shows her as hawk-nosed with a fat neck. My gut-feeling is that she was one of those women who are so fascinating that their actual physical appearance is irrelevant. I finally concluded that she was nothing like Elizabeth Taylor, was in fact quite ordinary looking but with great charisma and charm.

(Interviewer’s Note: In my article Was Cleopatra Ugly? I  argued that she was probably neither a raving beauty nor an ugly old hag, so an ordinary person with great charisma sounds right to me.)

Your thoughts on Octavian?

I try NOT to think about Octavian, but he must have had something going for him that convinced Caesar to make him his heir.

It’s difficult to give Octavian his due when you find yourself identifying with Cleopatra, I admit. I think he was a brilliant leader, but I’d have preferred it if Cleopatra won that battle. What legacy do you think Cleopatra left for her children–especially Cleopatra Selene?

I know very little about Selene. That’s your department.

What trends have you noticed in Cleopatra fiction lately? Has the Queen of the Nile inspired Egyptomania again after all these years?

I really don’t know how to account for it. The recent appearance of all sorts of novels about Cleopatra, and now her daughter, began long after I had begun working on my book. Or at least I hadn’t noticed them.

I’d like to thank Carolyn for stopping by and encourage my readers and Cleopatraphiles to pick up this wonderful book!