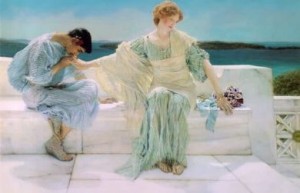 It may come as a surprise to most people, but the dominant historical setting in commercial fiction isn’t Tudor England. It’s Regency England–the godzilla of the romantic fiction world. I’d like to point out a surprising number of similarities between Regency England and Augustan Age Rome that make me think the latter should really make a comeback as a popular setting for fiction.

For one, there was the sexual repression. Though ancient Rome is known for wild orgies and sexual license, the Augustan Age was all about a return to “traditional family values.” Rome’s first emperor passed strict laws against adultery. Propriety in social situations was stressed. It would have been considered quite scandalous for a man to be alone with a woman who wasn’t his wife in the Augustan Age. The emperor once even chastised a young man for calling upon his daughter without his permission. If young men wanted to advance politically, they would have to marry, and if women wanted any degree of independence, they were required to produce children. Of course, the penalties for scandalous behavior in the Augustan Age were decidedly harsher than in the Regency period. For example, when the emperor’s own daughter was caught up in a scandal, she was banished for the remainder of her life.

As far as historical periods go, it was also very clean. The stress on daily bathing was a constant in ancient Rome and a form of flush toilet technology was not entirely unknown. The upper class would have been washed and perfumed, a perfect recipe for romance. Heck, the Romans even had recipes for toothpaste.

Fashion was as important in ancient Rome as it was in the Regency era. While most of the statuary of the period shows dowdy matrons blanketed in voluminous gowns and shawls, this is because of the above-mentioned sexual repression. Augustus wanted his family to be seen as icons of morality, so his wife was usually portrayed without jewelry. But this was a matter of official form. We know for a certainty that the emperor’s wife owned wildly expensive jewels.

Official form notwithstanding, young women wanted to be seen in society wearing the most fashion forward patterns and colors. Dyes were so expensive that the purchase of a royal purple cloak could bankroll the founding of a small city. Women of the time period adorned their clothing with golden clasps, silvered girdles and pearl embroidery. They wore dangling earrings made of precious gemstones. They plucked their eyebrows–indeed, well-bred girls in search of a suitor plucked everything but the hair on their heads.

Just as Regency England had a strict social hierarchy of nobility and trade families, so too did Augustan Age Rome. Though the emperor himself was born into one of Rome’s oldest noble families, the Julii, he was from a branch that had mixed with the lower equestrian class. Because of this, he needed to bolster his noble status, so he married Livia Drusilla of the Claudii whose noble pedigree was unimpeachable. (Of course, even Livia’s noble bloodline wouldn’t have impressed my heroine, Cleopatra Selene, who was herself the daughter of the Ptolemies, the most royal family of the time period. It must have been difficult for her not to remind the emperor that she was a princess descended from the kin of Alexander the Great whereas he was the descendant of a freedman–a ropemaker–on his father’s side.)