Who Were Cleopatra’s Grandchildren? 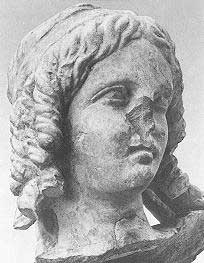 I’ve spent the past few years writing about Cleopatra’s daughter–a fascinating young woman that most people don’t even know existed. Today I want to talk about the next generation, the children that the infamous Queen of the Nile may have bounced on her knee if she’d lived to a ripe old grandmotherly age.

As far as we know, Cleopatra Selene was the only survivor of the Ptolemaic dynasty. But she seems to have been determined not to be the last of her line.

Though Selene’s parents were two of the most famously fertile individuals in ancient history, it is only certain that Selene had one son. He was born to her late in life and may have hastened her death. The name she chose for him is both the single most telling detail about her life and the most mysterious. Breaking with ancient tradition, her son wasn’t named after her husband, King Juba II.

Instead, Selene’s son was named Ptolemy.

The importance of this cannot be overstated. It indicates that even after having been married to Selene and ruling his own country for at least a decade, Juba’s lineage was still considered to be inferior to hers. Perhaps it indicates that she was the true ruler of Mauretania. It also may have led some to question whether or not Juba II was even the father of the boy.

In a time when it would have been considered their duty to produce children, Juba and Selene appear not to have been up to the task. Perhaps Juba and Selene did not fancy sharing one another’s bed. On the other hand, child mortality rates were extremely high in the ancient world. There may well have been other children that we just don’t know about.

An inscription from ancient Athens indicated that Juba had a son and a daughter, who is unnamed. However, this daughter need not have been the child of Cleopatra Selene because King Juba actually had another wife, Princess Glaphyra of Cappadocia.

Now, historians have argued that as a Roman citizen, Juba was unlikely to have broken with Roman law and taken more than one wife at the same time. It must be pointed out, however, that like Juba, King Herod was also a Roman citizen and had more wives than he could keep track of. Juba’s father had kept many wives and it’s entirely possible that the young king may have done the same to earn the respect of his Berber peoples. It strikes me that admirers of King Juba II who insist that he couldn’t have taken a second wife because he wouldn’t have taken a second wife may be projecting onto him some virtues of modern morality. After all, even the most Roman of the Romans–Julius Caesar–is rumored to have tried to pass a law that would allow him to take more than one wife.

A more persuasive argument, to my mind, is that Archelaus the King of Cappadocia was unlikely to allow his daughter, Glaphyra, to play second-wife to Cleopatra’s daughter. Therefore, she was probably Juba’s second wife after Cleopatra Selene’s death.

So, what does that mean for Juba’s daughter? His marriage to Glaphyra was extremely short and this daughter is never mentioned in conjunction with her, so the daughter was probably Cleopatra Selene’s child. (Professor Duane Roller has suggested that Juba may have reinstated the tradition of a harem, in which case this unnamed daughter may have belonged to a concubine. But if so, it is far less likely that she would be mentioned in an inscription.)

The most probable explanation is that the girl mentioned in the inscription is Selene’s daughter. If so, the girl was likely named in the tradition of the Ptolemaic dynasty. Another Cleopatra Something or Berenice or Arsinoe. (In my own forthcoming novel, Song of the Nile, she will be named Cleopatra Isidora.)

A third child is also hinted at. Some scholars have suggested that Selene may have had two sons, both named Ptolemy, one of whom died young. This would reconcile some confusion in the historical record about Ptolemy’s age, and might also explain why Selene would have tried for another child so late in life when it was so dangerous for her to do so. If true, it would mean that Ptolemy wasn’t the only son born to Juba and Selene, but the only surviving son.

He would go on to be the King of Mauretania and he is likely the father of the girl we now believe to be Cleopatra’s great-great-granddaughter, Drusilla of Mauritania!