When the Isle of Samos was the Center of the World 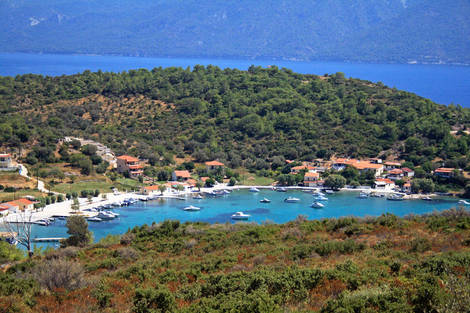 If it’s good to be the king, it’s even better to be the emperor. At least in ancient Rome. Unless your guards are waiting for you with daggers, or an angry wife feeds you poisoned mushrooms, you get to be the center of the world…wherever you go.

Now, when we think of the Roman empire–particularly the early Roman empire when there was still a pretense of a Republic–we quite naturally think of Rome as the center of the civilized world. Certainly, Rome’s first emperor, Augustus, would have wanted us to think of it that way.

However, the fact remains that once he’d wrested control away from the Senate and other quasi-democratic institutions, the government was always wherever he went. And in the aftermath of his victory over Cleopatra VII and Marcus Antonius (aka Mark Antony), the emperor spent quite some time on the Isle of Samos in Greece.

What was so special about this island? Well, for one, it had to be salt in the wound for those who had supported Cleopatra and Antony–because the Isle of Samos is where those two famous lovers made their doomed preparations for war. But it also had a lovely climate, and in spite of his stern Roman values, the emperor liked his creature comforts. (When fighting in the mountains in Spain, for example, he let his soldiers endure the cold while he vacationed down in Tarragona.)

Between the years of 22 BC – 19 BC, however, Augustus had another reason to move his court to the Greek island. Namely, he was preparing for war with Parthia to the East. He needed a relatively secure staging area from which to reorganize the Eastern part of the empire so as to make a stable foothold from which to advance. He had kings to appoint, taxes to levy, people to punish, and territorial boundaries to redraw.

In my new novel, Song of the Nile, my heroine believes that this is the perfect time to convince Augustus to restore her to the throne of Egypt. Like Cleopatra before her, she hopes to convince the Romans that she can provide them with grain in their long-sought war with the Parthians. It’s her experiences there, in Greece, engaged in a high stakes cat and mouse game with the emperor that change her forever.