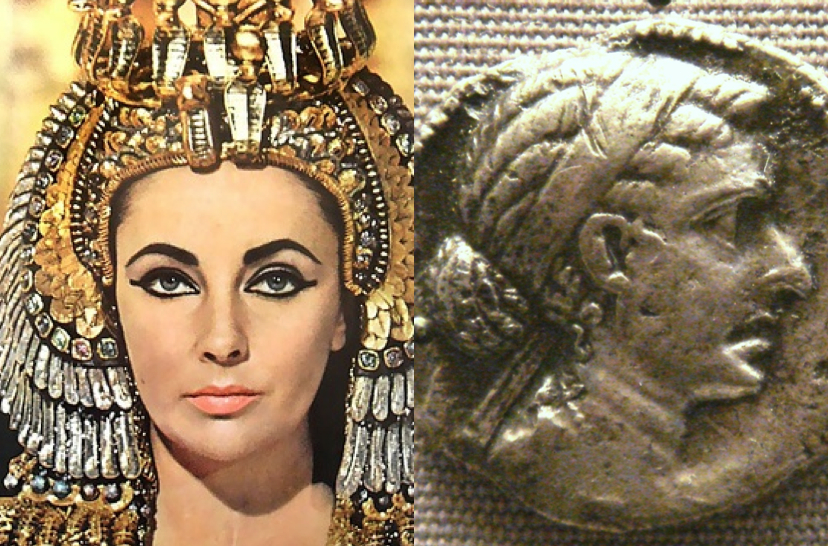 So which is the truth?

Despite, or perhaps because of, the iconic portrayals of the Queen of the Nile as a ravishing seductress, Cleopatra’s detractors point to the coins that were issued during her reign as evidence of her hideous appearance. Few of the coins issued during her reign are remotely flattering. But it must be noted that coins were stylized and meant to project an intimidating appearance. Mark Antony was said to be quite handsome and Augustus was described as a young Apollo and yet, they don’t always fare very well on all their coins either.

A more accurate way to gauge Cleopatra’s beauty is to check out her marble busts, which were carved in a time of Roman dominance where realism trumped Hellenistic idealism in artistic renderings. The marble busts of Cleopatra do not reveal a ravishing beauty, but neither do they portray a hook-nosed hag. What we see is a reasonably attractive woman in white marble without the color of a blush upon her cheek.

What about the literary evidence? Ancient historian Cassius Dio recounts that Cleopatra was “a woman of surpassing beauty,” and Plutarch tells us that Cleopatra was “a woman who was haughty and astonishingly proud in the matter of beauty.” However, a passage from Plutarch is often latched onto as evidence that the queen was anything but. In Plutarch’s Life of Antony, he writes,

“For her beauty, as we are told, was in itself not altogether incomparable, nor such as to strike those who saw her; but converse with her had an irresistible charm, and her presence, combined with the persuasiveness of her discourse and the character which was somehow diffused about her behaviour towards others, had something stimulating about it. There was sweetness also in the tones of her voice; and her tongue, like an instrument of many strings, she could readily turn to whatever language she pleased…”

This passage is often taken to support the argument that Cleopatra had the face of a troll, but it seems to me that Plutarch is giving us an honest assessment. Her beauty may not have been incomparable, but she did have some.