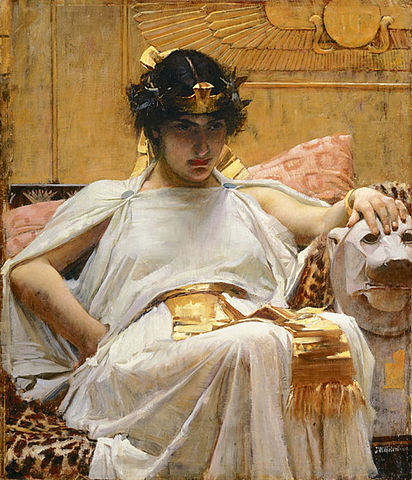 In researching my novels, I’ve had the opportunity to study the leadership styles of some of the most famous ancient rulers, both Roman and otherwise. As a result, I’ve compiled this list of tips and tricks for our next evil overlord:

1. Eliminate the Competition
Though they were bitter enemies, one thing Augustus Caesar and Cleopatra VII of Egypt had in common was an uncanny knack for bumping off anyone who might prove to be inconvenient. For Cleopatra, it was sometimes a matter of survival. Her sister, Arsinoe, made a play for her throne and would have had her killed if she could, so it has never struck me as particularly ruthless that Cleopatra begged her lover, Mark Antony, to get rid of her sister. On the other hand, Cleopatra’s young brother Ptolemy died under mysterious circumstances when he was still a boy under her thumb. Cleopatra didn’t want to leave any other options for the people to latch onto in case they didn’t like how she ruled Egypt and indeed, she seems to have eliminated all other rivals. At least, in Egypt.

Meanwhile, Augustus, the nephew of the inexplicably more famous Julius Caesar, was just as ruthless. Though he would castigate Cleopatra for her fratricidal ways, there’s no doubt whatsoever that he was responsible for exponentially more murders in his lifetime–including his own half-brother-by-adoption, Ptolemy Caesar, more popularly known as Caesarion. The reason? Apparently it was the boy’s name and thus we get the famous quote, “Two Caesars is one too many.”

2. If You Can’t Be A God, Say That You’re Related To One
The Romans didn’t like for their rulers to be kings, much less gods, so the effective rulers of ancient Rome had to find a different way to glorify themselves. They claimed to be the descendants of gods and goddesses. Mark Antony claimed descent from Hercules–a claim lent credence by the fact that he looked like the hulking demi-god. All the Caesars claimed descent from Venus because she was supposedly the mother of Aeneas, that Trojan hero who helped found Rome. They even built a temple to Venus Genetrix, just in case people didn’t believe they were serious about it. This was an idea borrowed, no doubt, from Alexander the Great, whose mother had been accused of infidelity. Alexander owned up to that, saying that his mother had been seduced by Zeus; being the son of a god helped him conquer the world. But all of these boys were pikers when it came to divine glorification, at least as compared to Cleopatra VII.

She didn’t bother tracing back her lineage to her goddess. She simply put out that she was the divine incarnation of Isis. And people believed it!

3. Show That You’ve Got the Common Touch
On the one hand, ancient rulers had to set themselves apart from their subjects. Claiming an affinity with the divine world was useful propaganda…until it wasn’t. How much more noble of those descendants of the gods, if they behave humbly in a crisis? The Romans loved stories about how Mark Antony suffered the same privations as his soldiers, eating bugs and bark in the woods, trying to survive a disastrous campaign. Why, he was just one of the guys!

By contrast, Augustus Caesar was never good in the field, so he couldn’t make that same appeal to the common soldier; heck, he couldn’t even stay in the mountains with them because it was too cold for his delicate sensibilities. However, he wore humble home-spun cloth that he claimed was woven for him by his own wife and sisters. And rather than admit that he was the ruler of the whole known world and could execute anybody he wanted on a whim, he made sure to call himself only the First Citizen, as if he were the first among equals.

4. Use your sex appeal if you’ve got it
We all know the story of how Cleopatra hid herself up in a carpet/sack of bed linens to be rolled out at Julius Caesar’s feet. It was a bold move; he liked her moxie. The two of them became lovers on the spot! But she probably didn’t do it because she had a fetish for balding middle-aged men. She wanted to be Queen of Egypt, and Julius Caesar was happy to reward her for her charms. Still, political seduction wasn’t just a game for women. Augustus allegedly claimed that his constant adulteries weren’t motivated by such a base motive as lust, but that he had to seduce the wives and daughters of the senators so as to better be able to spy on his enemies!

5. Never resort to open warfare when a smear campaign will do
When Julius Caesar was assassinated, his lieutenant, Mark Antony, could have sought open warfare against the Senate. But he didn’t. He bided his time until the funeral oration, waiting for the perfect opportunity to portray the Senate not as noble heroes who had saved the Republic from a dictator, but as wicked and avaricious murderers who killed a benefactor of the people. It was a stroke of genius and stoked the public’s fury into such a white hot rage that the senators had to flee for their lives.

On the other hand, turnabout is apparently fair play. It’s conventional wisdom that the Battle of Actium decided the fate of Cleopatra and Mark Antony, but that’s only true to a point. While they lost many ships in that engagement, they appear to have successfully broken a naval blockade, escaping with warships and treasure to fight another day on better ground. Indeed, Antony still had a huge army he planned to reunite with. That, however, never happened. As it turns out, Antony’s army was so dispirited by an ingenious lie that their commander fled the battle like a coward to chase after his lover, Cleopatra, that they surrendered to the other side without a fight. As the groundwork for this lie had already been set by years of propaganda in which Cleopatra was portrayed as a wanton seductress and Antony was a besotted fool, the soldiers believed that they had been abandoned, and they turned their cloaks. Antony’s enemies, the would-be Augustus and his general Agrippa, may have even rightly predicted what a blow this would be to a man who had, up until that last year, been wildly popular with his soldiers. Antony’s honor was mortally wounded and he retreated to a cabin by the sea where he ultimately sulked himself into defeat a year later.

6. Spend a lot of money
Ancient rulers never relied upon private industry. Perhaps fearing that hungry people had no patience for trickle down economics and that there would be riots if they didn’t come up with a jobs plan, Julius Caesar, Augustus, Antony, Cleopatra the Great, Herod the Great, Alexander the Great and even my heroine, Cleopatra Selene and her husband Juba II all invested deeply in infrastructure, regardless of the debts incurred. Temples, roads, aqueducts, new market squares, theatres and trade ports–it was all part of a plan to stamp their names on everything as well as to keep people working. And when that didn’t pan out, there was always some nearby country to invade and exploit.
7. Gamble
Julius Caesar is known for saying, “let the dice fly high!” This may be why he fell for a girl like Cleopatra, who staked her life on the idea that if only she could smuggle herself past enemy soldiers and roll herself out at the feet of Caesar, fortune would smile upon her. They were gamblers in that sense; both of them took outrageous political risks. But they weren’t the only ones. King Herod of Judea had chosen the wrong side in the Roman civil war; he’d been Mark Antony’s ally. When called to account by Augustus, a more timid man may have retired or even fled. But not Herod. He marched into the presence of the new emperor and declared that he had indeed been a great friend to Mark Antony. In fact, the conqueror would be hard pressed to find anyone who had been a better ally to his enemy. But, Herod pointed out, that just proved how loyal he was. And if Augustus would allow him to be the King of Judea, Herod promised to be just as loyal to him from now on. The gambit worked and Herod would go on to rule for the rest of his natural life.