The Mystery of Monuments… 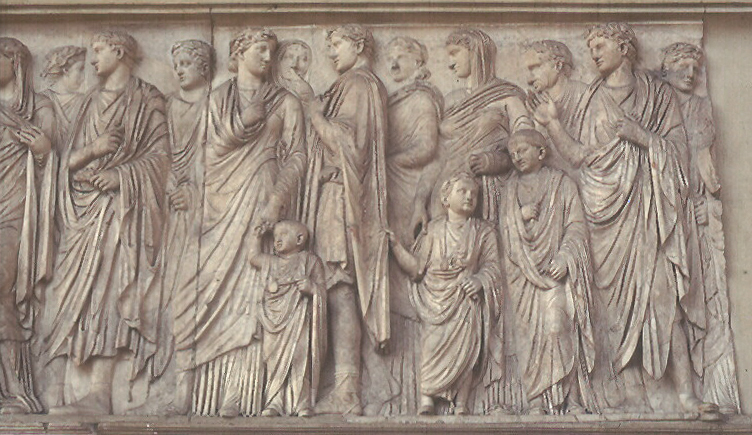 Augustus Caesar’s most lasting monument is the Ara Pacis, a monument to peace. It’s a splendid work of propaganda, and one could spend a lifetime unraveling all its hidden symbols and meanings. After having defeated Cleopatra and Mark Antony, Augustus wanted to usher in a Golden Age. He wanted to be remembered for restoring peace. What fascinates me, of course, is that one of the mysterious children depicted on the monument has been tentatively identified as Ptolemy of Mauretania–the grandson of Cleopatra VII, son of Cleopatra Selene and Juba II.

If the Hellenistic figure is actually Selene’s son, an argument can be made that the Mauretanian royal family was far more important to Augustus than historians have led us to believe. It is possible that Ptolemy’s inclusion on the monument is as a royal hostage–Augustus wasn’t shy in pointing out that he held the children of Gaul and Parthia as his ‘guests’. This figure may count as evidence that Selene’s children were raised in Rome, just as she had been, as wards of the emperor.

On the other hand, Mauretania wasn’t a conquered nation and Selene was a nominal member of the imperial family. She was the half-sister of the Antonias and a favorite of the emperor’s sister, Octavia. She’d been raised in their household. Perhaps it’s not so strange that her child should be portrayed on what is, in the end, a family monument.

Either way, Ptolemy’s inclusion on the Ara Pacis casts the importance of Mauretania, which has previously been considered a sort of minor league western frontier, in a new light. Certainly, Virgil’s insistence that Rome would expand beyond the Garamantes (a Numidian and Mauretanian tribal group) gives us a hint as to Augustus’ ambitions. Perhaps it was no accident that he put Selene and Juba II at the western border of the empire where he would need strong allies for a new campaign.

But back to the monument. What captured my attention is the swan in the so-called Tellus Panel, which cannot help but call to mind the mythology of Apollo and Cyrene, whose son became the patron god of cattle, fruit trees, hunting, husbandry. (Selene, of course, was the nominal successor to Cyrene as the queen of Cyrenaica in title if not in fact.) Then, of course, there is the similarity between the portrait of the goddess (identified variously as Tellus, Ceres, Pax and Venus) with her straight over-masculine nose, and the surviving portraits of Cleopatra Selene. But those are the kinds of eye-of-the-beholder things that an author of fiction is bound to make hay with.

If you want a little tour of the Ara Pacis monument, check out this video: