Soup’s On: Eating in a Civilian Conservation Corps Mess #foodiefriday 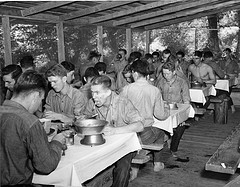 It might come as a surprise, but in the depth of the Great Depression people did enjoy parties and food and no less than at the hundreds of forestry camps around the country and in Alaska and Hawaii run by the Civilian Conservation Corps. A popular program in Franklin Roosevelt’s New Deal it put hundreds of thousands of young men to work planting trees, building bridges and park facilities, reclaiming land and fighting fires.

The CCC camps were run by the Army (unless it was a smaller side or spike camp which was run by the Forest Serivice for remote projects). Typically, it held up to 200 enrollees ages 18-25 years and laid out like a military camp. Wooden buildings or large tents housed the young men, but the mess hall generally was a permanent structure. As you can see, it came in all styles.

The kitchens varied in size, but many kept impressive pantries of can goods. Often local farmers provided fresh food for the tables, another aim of helping the local economy in this difficult econonic time.

Feeding such an army of hungry young men was an important function of the CCC camp and from my interviews with former CCC boys, one of the highlights of their time in the program. Meals were three times a day, the mid-day meal often a sack lunch or in some cases, a hot meal provided by a bull cook – all out in the field. The kitchen was run by both staff made up of a paid head and enrollees. Kitchen Patrol (KP), a legend in the WW II Army, was part of the CCC life, though boys could get certificates in sanitation and cooking work for their futures. 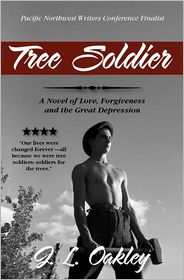 In my novel, Tree Soldier, protag Park Hardesty is recovering from a broken collarbone and is given the assignment of bull cook before he can get back to the hard work of planting trees and road work. He fishes for fresh trout and then prepares it in a skillet over a wood fire, something an interviewee told me he did when he was bull cook for a time. Trucks carrying hot soup and other foods also went out to the work sites. Generally projects were no more than 3 1/2 miles from the camp or spike camp for that reason.

The 3 Cs, as the program was sometimes called, was a home away from home for many of boys. As many of the projects were in the West and the most number of enrollees to work them from the back East and Chicago, celebrating holidays was a favorite passtime. Menus and decorations were made up, bringing a homey feeling to the season.

Fill a coffee pot with water and add a freshly cut chip of alder to it.
Bring to boil. Add coffee and return to fire.
Let boil for one minute.
Add cold water to settle the grounds and serve.

This coffee is delicious. I made it regularly while working the woods with a loal school district. Recipe came from an old time Forest Service veteran who knew the CCCs well.