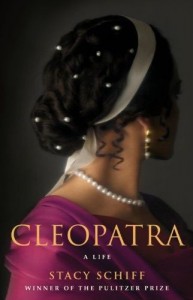 I couldn’t be more pleased about the resurgence of interest in Cleopatra VII of Egypt. Given that I’ve spent the past few years of my life working on a trilogy about Cleopatra’s daughter, I admit a ready bias in favor of Stacy Schiff’s new biography. However, I believe that this book would appeal even to those who don’t have an obsession with Egypt’s most famous monarch.

Schiff’s tone is easy and breezy–injecting humor and modern comparisons into this survey of the queen’s life. I appreciated the thoughtful analyses of the more hotly debated aspects of the queen’s life and Schiff very wisely refrains from taking a side. Instead, she explores each side of the argument, seldom throwing her weight behind anything that can’t be proved. (One exception to this is the manner of Cleopatra’s death. Though ancient evidence suggests otherwise, Schiff doesn’t believe Cleopatra died by serpenticide. However, she also cautions against the modern habit of insisting that Octavian must have killed his enemy. She suggests that, at most, Octavian my simply have decided to allow an already suicidal Cleopatra to finally have her way.)

In all, Cleopatra: A Life covers the subject in enough depth that one or two little tidbits were actually new to me, but she’s never bogged down in the history. Indeed, she skims over the surface of Cleopatra’s life like some a lotus on the Nile. If there’s any weakness to this excellent biography, it’s that. The narrative shies away from too much speculation about Cleopatra’s inner life. The author always remains quite detached, respectful to her subject, but remote.

Still, this is probably what a biographer must do. Those who are wishing for emotional investment should probably seek out historical fiction. Margaret George’s The Memoirs of Cleopatra embraces the same dedication to accuracy while also telling an emotionally compelling story.