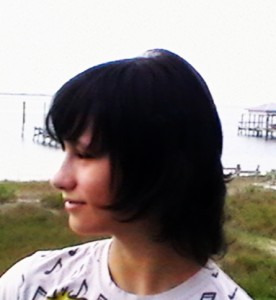 It gives me great pleasure to introduce another semi-finalists for the Cleopatra Writing Contest for Young Women. It thrills me to have Diane with us today because she’s drawn upon Eastern mythology instead of Western for her work. Over the course of the next few weeks I’ll be featuring these young authors and I hope you’ll make them feel welcome and help encourage their craft.

Diane Ward is 17 years old and from Brandon, MS. She has attended Belhaven University on Scholarship since 2009. Her interests in writing include science fiction, fantasy, horror, and historical fiction with an emphasis on folklore.

In addition to writing, she enjoys ballet and modern dance, as well as playing classical, old time, gypsy, and Celtic music.

Your piece was based on one of the four great Chinese beauties and judges were enraptured by the unique setting. Can you tell us about it and what motivated you to write it?
In a poem by Du Fu,Wang Zhaojun is portrayed as a tragic heroine, arguably a victim. I loved the poem’s melancholy atmosphere and the richness of a ceremonial and ornate time. Although I chose to portray Zhaojun differently than a victim, she takes responsibility for herself and rises to the challenge that the emperor presents her with, I decided to use one of Du Fu’s quotes in my short story before I even wrote it.  Another Chinese poem I was inspired by was Wang Zhoajun by Li Bai which also portrays Wang Zhaojun as resentful of the emperor’s decision. In Li Bai’s poem she leaves Chang’an in tears saying she is now only a concubine. I immensely enjoyed these poems, but I wanted to make Zhoajun’s bridging the two cultures not merely circumstantially heroic.
I was particularly struck by the themes surrounding greed. What personal experiences did you draw upon to write about that?
Personal experiences bleed into my writing whether I want them to or not.  In competitions that I’ve been in (although thankfully not this one) ambition and greed seem to get blurred together. I think it is easier for highly moral people to justify doing something they ordinarily wouldn’t if they consider it being done for someone else rather than for themselves. This is one of the reasons why I have Mao Yanshou act entirely for himself in the story. There is no ambition to his actions; it is only for the love of money. He’s a shallow character focused on personal, short term gain. Zhaojun is his antithesis. She’s ambitious, but not greedy, patient and humble.
What’s your favorite subject in school?
Physics has been very inspirational in my science fiction writing, especially when combined with astronomy. I find it easier to use concepts in physics for content?rather than chemistry or pure mathematics?because physics applications are often more apparent.  I try to put some actual science in my science fiction, so it won’t just seem like futuristic fantasy, but even though I like hard science fiction and purely inexplicable fantasy, the synergies of the two can be equally delightful. Other than physics my favorite subject would have to be literature. I still enjoy reading the anthologies I bought for my British Literature class.
Tell us about your home town.
I live just outside of the city limits of Brandon, Mississippi, so technically I don’t actually live in the city. Since we live in the country, we’re able to keep several horses on our property and there’s another barn within walking distance from our house. Even though Brandon is not a huge city there’s still plenty of places in it I haven’t explored.
What kind of author do you want to be?
I love writing short fiction and flash fiction, but ultimately I would like to be a novelist. I consider my writing primarily entertainment, so of course I want it to be entertaining but I also want to write things that involve people intellectually and emotionally.
Is there a woman in your life who has helped guide you towards a better future? Is there anything you’d like to say to her or about her?
Naturally, my mom. I’ve been homeschooled all my life and she’s taught all of my subjects, and she didn’t just teach me, but simultaneously my two younger sisters.  Also, I would like to thank my grandmother. My grandmother has always supported my pursuits in academics and art. When she visits us from Texas she always makes a point to listen to our music or read something that I’ve written.
What one thing do you know now that you wish you’d known before?
It’s like that time my horse kicked me in the knee, got loose and ran across the parking lot and into the audience seats a day before the show started. I probably wouldn’t have won the show if I didn’t get serious about getting my horse’s mindset right if he hadn’t shown me he was completely unready. If I did know something innately without having to experience it or learn it, it wouldn’t mean as much to me. So I’ve learned to accept not knowing things that even would have made life easier.
And now, for our lightning round.
Your favorite meal?
Sushi
Your favorite myth?
I really like Celtic mythology. One of my favorite figures is Cethlenn and the Fomoire.
Your favorite book (other than mine, of course)?
That’s way too hard. For the moment I’ll say Dark water (Originally published: ????????) by Koji Suzuki
Your guiltiest pleasure?
Videogame marathons.

Does anyone else have a question or two for Diane?