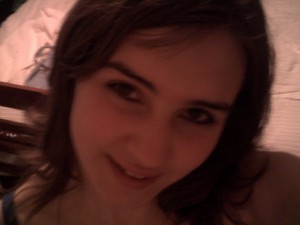 It gives me great pleasure to introduce another semi-finalists for the Cleopatra Writing Contest for Young Women. Abigail Grant is a talented young woman. Over the course of the next few weeks I’ll be featuring these young authors and I hope you’ll make them feel welcome and help encourage their craft. Abigail Gant is a home schooled 14-year-old with a passion for dancing, writing, and music. Of her interests, writing is first and foremost, and has been from the moment she was old enough put a pencil on paper.

When she was younger, she spent most of her writing time taking ideas from books she had read and molding her own characters into those story lines, and the authors she loved–Erin Hunter, Brian Jacques, Cornelia Funke, and J.R.R. Tolkien–can always be seen in her works.

Your piece, A Fear Unrelenting, is about a very emotional topic. Can you tell us about it and what motivated you to write it?
A Fear Unrelenting is historical-fiction, set in Holland during World War II, when the Nazis started sending Jews to concentration camps. It centers on a family that is housing Jews and get caught, and what my main character, Adriance, does when the Nazis threaten to kill her family. When my mom told me about the Cleopatra book contest, I had just finished reading The Hiding Place, which was an emotional time for me. Something about the fact that every horrible thing that happened in that book was true, and the unbelievable courage the characters had, transfixed me. What would I do if I were forced into that kind of position? What kind of person would that have pushed me toward being? And, if I survived and my family didn’t, how would that knowledge effect me?

I was particularly impressed with the theme of betrayal that ran through your work. What personal experiences did you draw upon to write about such a guilty heart?
Guilt is an interesting topic to me, also a familiar topic, to me and everyone else, in the way it can make you scared, angry, sad, all at the same time… and the extremes some people will go to to run from it. Everyone feels it at some time or other, so everyone can relate to my story- not directly, of course, but indirectly- everyone has felt the urge to ignore conscience and run from guilt to stop it from hurting so much. The story line suggests that when you trip over your own obstacles, instead of breaking down and refusing to go on if you have to risk feeling that pain again, you have to get up and try a second time, and probably a third time, and a fourth. Running only makes the pain worse when it catches up to you.

What’s your favorite subject in school?
Well, I’m homeschooled, which basically means in my case that my favorite subject varies depending on which book is my favorite. I’m enjoying Logic right now, reading a book called How to Read a Book. You see… I’m a nerd.

Tell us about your home town.
I’ve lived it 4 different states. I was born in Mississippi and lived in North Carolina for a year (but I was too young to remember), moved back to Mississippi, where I grew up, we live in Arkansas now, and we’ve lived in Tennessee for about three years. So I guess I would call MS my hometown, but in a metaphorical sense, Tennessee is where I grew up, and where I think of when I think of home. I love the mountains there, I love the people, I love the climate, and my best friend, Jemma, lives there too; whereas MS is hot and muggy, and most of the people I was close to have either moved or I’m not close to anymore, with a few exceptions. One day I’m going to move back to Tennessee, buy a mansion right next to the mansion Jemma’s going to buy, and I’ll have an entire floor dedicated to the care of the twenty cats I’m going to have.

As a fellow cat lover, I certainly approve of that plan. What kind of author do you want to be?
I entered a historical fiction short story, but I’m more comfortable with fantasy. In my free time (which, in most people’s opinion, I have way too much of) I invent languages and countries (you see… I’m a nerd.). I’m writing a trilogy right now, called Timeless, which I’ve been working on for 6 years off and on, and that story is set in its own world. Fantasy is fun, because there are no are limits, which makes it sort of hard, too, because to write a good book you can’t just lace a few random thoughts together and hope it works. Another reason I like fantasy is that it involves lots of wacky accidents, for example, I and a friend of mine invented a story line that emerged from a conversation we were having about pizza.

Is there a woman in your life who has helped guide you towards a better future? Is there anything you’d like to say to her or about her?
Definitely my best friend, Jemma. She was the one who inspired me to take my writing seriously and I can’t imagine having a more loyal friend, someone who really believes that my writing is worth something, even though she’s way better than me. 🙂

What one thing do you know now that you wish you’d known before?

That there’s such a thing as short stories. Yes, really. I’d always been obsessed with novels. I didn’t realize I can make a story 10 pages long and it still be a story.

And now for our lightning round.

Phineas and Ferb. No one laugh.

I… have no idea. One of my pet peeves are using the words “and then” together in a sentence… and for some reason I have a grudge against the word “some”…

Does anyone else have a question or two for Abigail?