Livia Drusilla: Evil Empress or Maligned Mother of the Empire? 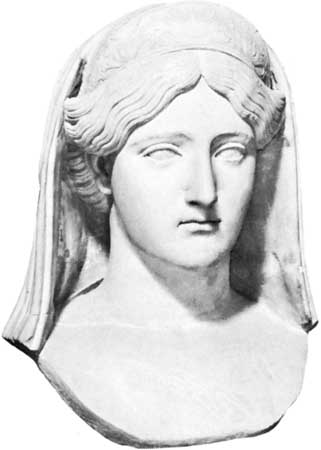 In ancient history powerful women got a bad rap. This was especially the case for Rome’s first empress, Livia Drusilla, the wife of Augustus Caesar. She comes down to us as a sort of wicked step-monster of the Julio-Claudian family–one who murders, manipulates and maligns everyone who gets in her way. The ancient writers didn’t much like her. Modern writers don’t like her either.

Played to perfection by Sian Phillips in the mini-series of Robert Graves’ famous I, Claudius, Livia emerges as a delicious villainess. She makes Cruella de Vil look rather civilized for merely wanting to turn spotted puppies into fur coats.

Personally, I find the lure of such extravagant evil too hard to resist.

When writing about my heroine, the orphaned daughter of Cleopatra, who was taken as a prisoner of war at the age of nine and marched through the streets in chains, there were plenty of villains for me to choose from. But my novels aren’t about the the tragedies this real life princess lived through; my novels are ultimately about Cleopatra Selene’s triumphs. Consequently, I needed an antagonist who could show the darker sides of my heroine’s ambitions.

It’s true that in my novels, Cleopatra Selene plays a dangerous and twisted game with the ruthless Emperor Augustus, who was obsessed with her mother and is now obsessed with her. But I wanted to show the other side of the coin–a woman who was nothing whatsoever like Cleopatra of Egypt, but almost as powerful.

That’s where Livia came in.

Unlike the seductive Cleopatra, Queen of the Nile, Livia was known for chaste and modest public behavior. (At least, after she married Augustus.) She always dressed in voluminous garments that practically covered her from neck to ankle, and of course, her husband would brag that she spun the wool and wove the cloth to make those baggy clothes as well. She was a veritable goddess of domesticity, our Livia. And one who supposedly eschewed expensive jewelry, claiming that her children were the only jewels she needed.

In spite of all this puritanical posturing, Livia was, nonetheless, associated with sexual scandal. According to Suetonius, she was rumored to procure young virgin girls for her husband’s bed. That made me wonder if such girls came from within the emperor’s own household and included vulnerable orphans like Cleopatra Selene.

Livia was also rumored to be a poisoner. She’s known to have concocted tonics and elixirs that she said accounted for her extraordinarily good health and long life, but if you were supping at the imperial palace, you might be better off not drinking the wine. At various points, she’s been accused of murdering Marcellus, Drusus, Germanicus, Posthumous and even Augustus himself.

In my novel, she offers Cleopatra Selene a poisoned cup.

But was Livia really such a she-devil?

Her biographer, Anthony Barrett, paints a picture of a much maligned mother of the empire. She had a documented record of altruism against which her detractors could only conjure up rumor and innuendo. She went to the emperor on behalf of the citizens of the Isle of Samos to return them to independence. She is known to have intervened on behalf of one woman accused of witchcraft; she also saved the life of a man who accidentally appeared naked before her, saying that to chaste women such men were like looking at statues. Known to advise her husband on political matters, Livia enjoyed a marriage with him of more than fifty years. Especially tricky, considering that she never gave him a child and he rather desperately needed an heir.

I can’t point to a single documented event in which Livia did an evil deed. Her worst crime, it seems, was to have lived for so long, and exerted such power over the empire as the wife or ancestress of every Julio-Claudian emperor.

For the misogynistic Romans, the only way to explain her political success was to make her a monster.

In the end, Livia was deified and worshipped as a goddess, so maybe she’ll have the last laugh. Certainly, the one regret about my own novels is that I so enjoyed exploiting her bad reputation.

Expect lots of wickedness and depravity in Song of the Nile, but in the third and final book of the trilogy, I hope to redeem myself by giving Livia a little bit of empathy. So, what about you? Are there women in history that you love to hate?