Keeping it in the (Ptolemaic) Family 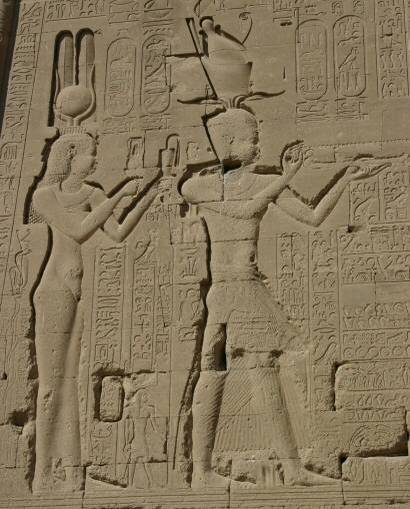 There are a whole slew of fantastically good reasons why incest is illegal and taboo, including the lasting psychological damage it does, and the dysfunctional family dynamics it creates. That said, there’s a good chance that the Ptolemaic Dynasty would have been filled with fratricidal thugs and harpies even if they hadn’t made it a practice to marry their siblings.

I say this because just about every relationship in the ancient world was founded upon some manner of abusive power. While we romanticize the relationship between Cleopatra VII and Julius Caesar, and especially the relationship between Cleopatra and Mark Antony, both of these love affairs were based on mutual political interest–in Cleopatra’s case, a desire to stay alive. While many accused her of seduction, the fact remains when she rolled herself out at the feet of the Roman general, she was more than thirty years his junior, and utterly at his mercy.

Today, we would rightly question the ethics of these love affairs, but given the way women were treated in the ancient world–and even until recently–her relationships with these men seems positively enlightened. Especially when you contrast them with the sexual relationships she was supposed to have as the Queen of Egypt.

To wit, she was not only expected to marry her brother, but to have children by him.

So, how did this come to pass? The Ptolemies considered themselves to be the successors to Alexander the Great–that Macedonian King who conquered the known world. Ptolemy was his general, and some said his half-brother. After Alexander the Great died and his empire was broken up, Egypt fell into the hands of Ptolemy and a dynasty was born.

His daughter, Arsinoe II, would start the tradition of incest. Married off to an old King of Thrace when she was still a teenager, she was the ultimate survivor. Her life was frequently in danger and she made many narrow escapes, including one from the Seleucid Army marching on her kingdom. At some point, Arsinoe seems to have decided that if she wanted to be safe, she couldn’t trust anyone outside her immediate family. So, she returned to Egypt and married her full brother, Ptolemy II.

Now, the Greeks didn’t have a tradition of incest in their ruling families…but the pharaohs of Egypt did. By marrying her brother, Arsinoe was able to help create a link between the new Ptolemaic dynasty and the very old traditions of the native Egyptians. It served her extremely well as she became the first female pharaoh of the Ptolemaic dynasty, ruling not just as the wife of the king, but as a king in her own right.

After that, the tradition took hold. The Ptolemies discovered that incest served some important political purposes.

For one, incestuous marriages virtually ensured that the Macedonian ruling family would never have to dilute its blood with native Egyptians, for whom they seemed to hold some disdain. Moreover, it put the kibosh on social mobility. No ambitious Macedonian or Egyptian boys would grow up with the dream that they, too, could be pharaoh as long as they worked hard, sucked up, and poisoned the right people.

The best an ambitious man could hope for was to make his daughter a concubine to the king, which might, if the queen was infertile, allow him to one day become grandfather and vizier to the next king. Consequently, a tradition of Ptolemaic incest kept the threat of being poisoned by outsiders to a minimum.

Another advantage to keeping it in the family was that foreign powers couldn’t get a foothold in Egypt. The usual way by which empires encroached upon one another was by marriage. If I’m the king of the nearby Seleucid empire, for example, it might be a good idea to marry my daughter off to the King of Egypt. Then, when the pharaoh is old and feeble, I could claim the throne in the name of my grandson with my own army to back me. But if Ptolemaic kings only marry their sisters or daughters or nieces, I don’t have a prayer.

So, the potential for foreign invasion and manipulation was reduced by incest. But what of internal conflicts? Well, when you marry your own sisters you can maintain control over your nephews–all of whom would have a claim to your throne. It’s an easy solution to turn them into sons!

You might assume that the Ptolemaic gene pool would produce a lot of inbred drooling abominations, but aside from a tendency towards weight-gain and buggy eyes, the Ptolemies don’t appear to have suffered any genetic abnormalities. Unless you count the unflinching resolve to murder your siblings as a matter of nature rather than nurture.

Apparently, familiarity breeds contempt and the Ptolemies became a fratricidal lot. The family infighting was ruthless and deadly; there was no defense against those family dynamics.

So was it worth it?

Well, the evidence tells us that it was. The Ptolemies ruled Egypt for almost three hundred years. And if the Battle of Actium had gone the other way, Egyptian culture would have dominated western civilization.