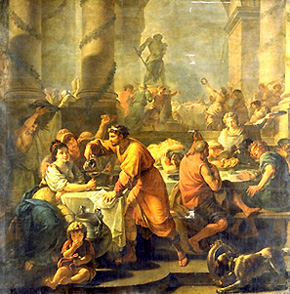 December used to be a month – now it’s a whole year. ~Seneca

I think many of us can relate to this ancient observation by Seneca. From its origin as a single holy day in December, the Roman festival of Saturnalia snowballed into a month-devouring extravaganza of parties, presents, shopping, eating, and funny hats. Officially, Saturnalia was the festival of Saturn, the father of Jupiter and his siblings; he was a god of peace and plenty, and the Romans worshiped him at the winter solstice with a day of rest and feasting. Being Romans, that day became a few days, then a week, then almost a whole month of partying, gift-giving, and relaxation of the strict Roman social order into something kinda-sorta almost resembling equality. (But not really.) Augustus and later emperors tried to trim the celebrations back to a few days, but it never worked; the season eventually became so overblown that conservatives complained about too much secularization, too much focus on material goods, and that a holy day had become an excuse to quit work and get drunk. (Sound familiar?)

The Romans celebrated Saturnalia in ways that would look very familiar to our modern eyes: decorating homes and shops with winter flora; exchanging gifts with friends and family; giving bonuses to employees and servants; even wearing gaudy holiday clothes. And of course, food – lots and lots of food. Saturn was an agricultural deity, and Saturnalia was the time to show him how thankful you were for his bounty by stuffing your face with as much of it as you could. Because Saturn was associated with grain, baked goods were a staple feature of his festival, but other than that any kind of festive potluck with friends and family would do. If you’d like to give your midwinter holiday get-together an authentic Saturnalia feel this year, here are a few suggestions to get you started. Focus on finger food: sausage rolls, deviled eggs, cheese, olives, nuts, seeds, and dried fruits would all be period-correct. The Romans considered raw vegetables unhealthy, so skip the crudités and serve your veggies in the form of pickles, chutneys, or relishes. Hummus would be fine, and those little miniature quiches are surprisingly authentic. Be sure to include lots of bread: rolls, rounds, and especially flatbread.

Pork is the easiest and most authentic choice for Roman meat dishes (if you’re fresh out of wild boar, sausages and bacon are both perfectly fine). If you don’t eat pork, go for poultry, lamb, or game; seafood would be OK if you can get it fresh, but most Romans rarely ate beef. If you’re not a carnivore, try legume or winter vegetable dishes that are thick enough to be scooped up with flatbread.

Dessert is where Saturnalia really shines – baked goods and sweet treats are what make this holiday special. Candied fruit, jams, and tarts would all be appropriate, as would sweetened nuts and seeds — but the real star of the show should be cookies and cakes. Gingersnaps, pfeffernüße, paprenjak, nut rolls, honey buns – your favorite holiday cookie is most likely quite appropriate for Saturnalia. (Just remember the Romans didn’t have chocolate. But who am I to stop you?) These cakes were often part of the religious offerings, so if you’re going to splurge, splurge on the cookie tray. Here are two Roman recipes you might want to try; both were considered worthy to be given as offerings, and they’re also quite tasty.

Grind the anise and cumin. Mix the flour with the juice, then stir in the anise, cumin, lard, and cheese. (I’d recommend a little salt if your cheese is bland.) Shape into small balls and flatten by pressing a bay leaf into each. Arrange the cookies on a tray, bay leaf down, and bake at 350F (180C) for half an hour. Makes about 20 cookies. Yes, you can substitute shortening for the lard; and if you want to increase the spice content, try poppy seed, cinnamon, ginger, or black pepper.

This is my absolute favorite Roman recipe, and I’ve tried quite a few. Tiny deep-fried cheesecakes – a treat truly worthy of the gods! Combine equal parts flour and soft cheese. I use spelt flour, and I like to toast it for a little more flavor; for the cheese I recommend a good quality ricotta – cow, goat, or sheep, it’s all good. (Again, if your cheese is bland, you’ll want to add a pinch of salt and/or sugar.) Let the dough rest while you heat up a big pot of lard (OK fine, vegetable oil). Form the dough into small balls and deep-fry them, turning with chopsticks, until golden brown. Drain on paper towels. Drizzle honey over the globi and, if you’re feeling frisky, sprinkle them with poppy seeds. Bask in the deliciousness.

Now make yourself a nice big batch of spiced wine, and you’re ready to set your Saturnalia table. Carpe cibum!

Recipe modernizations are from A Taste of Ancient Rome by Ilaria Gozzini Giacosa based on texts from Apicius and Cato. If you’re into primary sources (and who isn’t?), I recommend Martial’s Epigram 14, Seneca’s Epistle 18, Horace’s Satire II,  Macrobius’ Saturnalia, and Cato’s De Agri Cultura.

Heather Domin is the author of the 2009 novel The Soldier of Raetia, putting her History degree to excellent use by writing fiction filled with gratuitous sex and graphic violence. A lifelong writer and nerd, she embraces the ability to publish her writing on the internet while remaining an anti-social recluse. She reviews fiction and nonfiction for the Historical Novel Society and can often be found skulking around on Goodreads; she also keeps a blog at Livejournal and has a Twitter where she doesn’t say anything interesting but at least she doesn’t spam you.