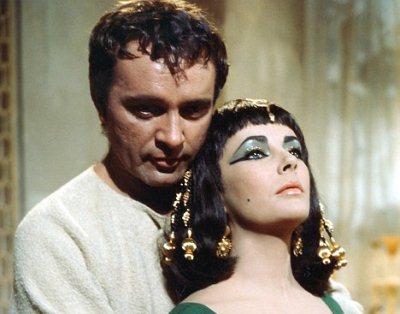 I first came to admire Elizabeth Taylor for her definitive portrayal of Cleopatra in the 1963 production. She never won an award for it–those accolades would come from other movies–and Elizabeth Taylor’s antics, on and off the set, bankrupted a studio, earning the film a reputation as a gorgeous over-the-top disaster.

None of that mattered, of course, because everything about the movie was a metaphor for Liz Taylor’s life.

Like the historical Cleopatra who rose to queenship before the age of twenty, Elizabeth Taylor was a child star. Like the queen she portrayed, she collected expensive jewels, demanded gifts as her due, and was used to having things her own way. Also, like the queen she portrayed, all the wealth and indulgence never stopped her from doing great things, from championing important causes, and from loving passionately.

It was on the set of Cleopatra that she met and fell in love with Richard Burton. It’s often said that Taylor chose movie roles that would mirror her own life and this was certainly the case here. Like Antony, Richard Burton was married. He had loyalties elsewhere. For that matter, Liz Taylor wasn’t free to love him. That didn’t stop either of them. They engaged in the most scandalous extramarital affair of their day, and though they would divorce and remarry and divorce, their love would survive even Richard Burton’s death.

Taylor remained convinced that she and Burton would have remarried, and remarked that though she’d been married to other men, every man she’d been involved since Richard Burton was simply a way to pass the time. That’s the love of legends. It’s the kind of thing that made Cleopatra an unforgettable ancient queen, and it’s the kind of thing that will allow Liz Taylor a share of immortality, too.

Certainly, she was a fine actress with many memorable roles and we would all do ourselves a favor to watch a few of her films in the next few weeks. She’s stunning in Cat on a Hot Tin Roof and riveting in Whose Afraid of Virginia Wolfe? In addition to her splashy blockbusters, she tackled difficult movies, artsy movies, serious scripts way ahead of their time. A natural beauty, she had a talent for stillness, a talent of drawing the camera to her. A unique way of mixing class with crass. She may not have been the Queen of the Nile, but she was the Queen of Hollywood and she never let anyone forget it.

Given her love of everything huge and over-the-top, it would be easy to dismiss her as a simple starlet. But Taylor’s brave advocacy for gays and HIV patients in a time when it wasn’t remotely politically correct to do so showed that her flamboyance was a part of her royal mission to live large, love intensely, and right big wrongs.

I can’t help but think the historical Cleopatra would have found in Elizabeth Taylor a kindred spirit, and though I’m saddened by her death, I believe both of them will live forever.