Dining With A Castillian Knight: Recipes from 15th Century Spain 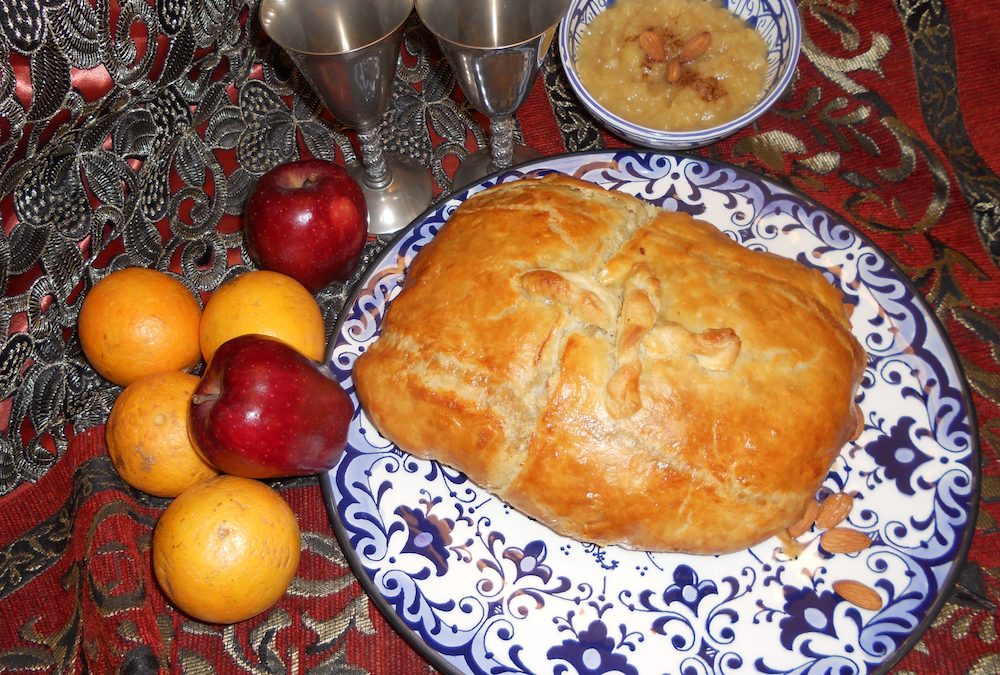 Readers, none of the historical recipes I’ve featured in this series has made me as hungry as this one. Adelaida L de Lower presents a feast that would make such a lovely holiday meal I’m now considering readjusting my holiday menu. You should too! I defy you to look at the picture below and not feel your mouth water. It is hard when you are writing a novel to stay away from what Montaigne called “the science of the gullet.” Sooner or later your characters are going to be hungry and you are going to have to feed them. For a historical writer this can be tricky.

In researching my novel The Red Ribbon, set in 15th century Spain, I came across the topic time and time again. Before setting a table or providing a snack for my characters I had to do several things. First it was necessary to learn the origin of the ingredients. This is very important because The Red Ribbon starts in 1491. It is amazing how much of Europe’s modern diet comes from elsewhere. The second step: was the season right for a fresh ingredient or would the item have been dried, salted, or pickled? Last, I checked the liturgical calendar of the Catholic Church. The Red Ribbon’s main character, Iñigo, is a Christian knight who could afford beef, for instance. At that particular time, beef would have been banned during the “two Lents,” which together spanned almost one third of the year. Coincidentally, in 1491 the Church had begun to allow the consumption of animal products such as milk and eggs that had been forbidden before. Iñigo, however, was too busy saving people and doing other knightly deeds to have noted that memo.

Compared with the rest of Europe, the kingdoms of Spain had an enticing variety of food. During eight centuries of Arab occupation, the Muslims had introduced rice, oranges, capers, almonds, caraway, and saffron amongst other foodstuff. On the eve of the expulsion of the Jews, there was still a vibrant Jewish culture in the peninsula. Moreover, Castile and Aragon had been expanding. The conquest of the Canary Islands and of cities in North Africa meant that more exotic food was entering Spanish markets. So not only did the inhabitants of Spain—Christian, Muslim, and Jewish—had different cuisines guided by their religious beliefs, but they had more to choose from than your average European. In fact, the princesses of the kingdoms of Spain who married European royalty were often dismayed by the dullness of other courts. I imagined they missed the home cooking too. Of course, diversity in the diet applied to the moneyed folk. Peasants in Spain, as peasants everywhere, ate ‘gachas,’ a cereal-based porridge.

What was on the nobility’s table? Christians in Spain believed themselves to be heirs of the ancient Romans and Visigoths. Although sumptuary laws tried to curb excesses, the multi-course banquets of medieval and Renaissance Spain have pre-Muslim roots. For research purposes, when dealing with the Christian diet, I used one of the earliest cooking books printed in Spain, Roberto de Nola’s Libre del Coch, written in Catalonian in the late 1400’s and translated sometimes as the Book of Cooking or Book of Stews. Nola, master cook of King Fernando of Naples, based his work on an earlier medieval manuscript. He included a large array of recipes for every season, using everything from seafood to fowl and beef, including cat. I hate to say this but Nola recommended the infamous “Cat as you like it” recipe, describing barbecued cat as a delicacy, and cautioning not to eat the head or brain because “you will lose sense and judgment.” Is this proof of early mad-kitty disease? Who knows! What is certain is that Nola’s cooking book was one of the earliest best-sellers in history.

From Nola’s book then, I give you two recipes. The translation is mine and it is close to the text; I have kept the original punctuation.

SAUCE OF ROASTED APPLES AND ALMONDS

“You must take the sweetest apples. and peel and cut into quarters: and remove core and the pips. and make boil in a pot as much water as you might need: and when the water is boiling cast the apples. and then take the well-roasted apples: and grind them well in a mortar: and put them in the apple broth: and strain them through a woolen cloth with a crustless piece of bread: and then add a good bit of ground cinnamon and sugar: and then simmer and when it boils remove from the fire and add the well-drained cooked apples. but watch not to burn them: so that you can make a sauce and when it is done sprinkle sugar and cinnamon.”

Making the first recipe was easy enough. With the second I took some liberties. Modern cooks believe that what Nola describes in his book is a batter. Others, on the basis of the word cuirass, ‘coraça,’ argue that it is an early ‘en croute.’ In reading the text I am inclined to believe the former. But for the shot I wanted the armor. Historical fiction writers are allowed some license, right? So I used puff pastry, and it was delicious.

“Roast a good hen. and when it is half roasted, baste it with bacon. afterwards take well-beaten good yolks: then with a spoon or the handle of a ladle spread the hen with these yolks, little by little. and then scatter well-sifted wheat flour and ground salt over the eggs, turning the hen quickly: and it is worthier the cuirass than the hen.”

As we say in Castile, ¡Buen Apetito!

BIO: Adelaida Lucena de Lower was born in Tangier, Morocco, to Spanish parents. Her family spoke Castilian, French, and Arabic when they did not want her to understand. In love with Shakespeare, she decided to learn English and eventually became an ESL teacher. Adelaida married an American GI—a ghastly shock to every Spaniard who loved her. The GI turned into an American diplomat and, together, they traveled to faraway places. She now lives in Manassas, Virginia, revising The Red Ribbon.