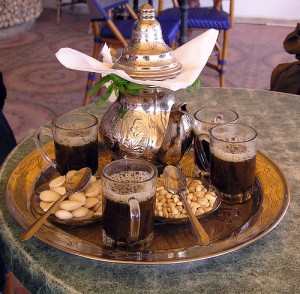 So, we all know about the wine. Falernian, Caecuban, etc. Ancients drank the stuff in copious quantities. But what else did they drink? This was a point of inquiry for me when writing Song of the Nile: A Novel of Cleopatra’s daughter who became the highly Hellenized queen of an exotic North African kingdom. I wanted to know what kind of local beverages she may have been introduced to, but this turned into rather a lot of detective work because ancient Berber culture is largely lost to us.

We know that mint tea is ubiquitous in North Africa now. In Morocco, Tunisia and Algeria–which comprised the ancient kingdom of Mauretania–mint tea is an art form, poured at a distance so as to create a froth on the top of each cup. The love of mint tea should come as no surprise because mint grows easily in this climate. But the actual introduction of tea leaves is a relatively modern phenomenon. As it happens, refreshing mint beverages were served long before the introduction of tea leaves. The ancient Berbers drank an herbal infusion of mint leaves–essentially, a tea-less tea, or, if you prefer, a tisane.

You can make a version of this refreshing but old-fashioned treat at home very simply:

1. Put mint leaves (and verbena/lavender) in bottom of tea-pot

2. Pour boiling water over leaves and leave to steep for at least five minutes hibiscus "tea" soaking in a vat

Another ancient beverage is so-called Hibiscus tea. Again, there wouldn’t have been any actual tea-leaves in the ancient recipe, but this tart and refreshing infusion is rumored to have been a favorite of the pharaohs. So I imagine that Cleopatra Selene, whose mother was the last pharaoh of Egypt, may have treasured this taste of home.

Made from dried hibiscus flower petals, the beverage can be colorful and is said to convey numerous health benefits for its anti-oxidant properties.

Consider it to be a more ancient form of cranberry juice. Less pleasantly, it can stain, so be careful! It looks temptingly easy to make:

1. Arrange flower petals at the bottom of a pot or bowl

2. Pour boiling water over the petals and let sit overnight

3. Pour infusion through a strainer into a pitcher and discard flower petals

4. Sweeten to taste with honey (or sugar if you want to be all modern about it)