Ancient Zoos of the Pharaohs 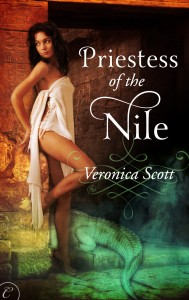 Guest Post by Veronica Scott, author of the Paranormal Romance Priestess of the Nile

It’s a hot, sunny, lazy afternoon in Ancient Egypt. Having finished his duties for the day, Pharaoh wants to relax with his beautiful wife and young son, but the boy is restless, bored with his toys and his attendants. The child’s fussing disturbs the inner courtyards of the palace.  The Chief Scribe bows and reminds Pharoah and the Queen that the palace has an extensive collection of wild animals in the zoo and perhaps the young prince would be amused to go see the lions and elephants. Pleased, Pharoah decides to make a family activity of the viewing and peace soon reigns…. When I’m doing research I often find fascinating bits I can’t quite use in the current book but maybe I’ll be able to place in a future effort.  Pharaoh’s zoo is a plot element I hope to work into a future Tale of the Nile. Set in a paranormal, alternate version of 1500BC Egypt, my stories have a relatively young Pharoah, Nat-re-Akhte. I can imagine him taking his small son to their own private zoo for amusement, just as parents do nowadays. I certainly took my daughters to the zoo enough times!

Various archaeological expeditions to the ancient Egyptian capital of Hierakonpolis found evidence of an ongoing, exotic menagerie dating back to around 3500 B.C.  Altogether  the researchers have found the remains of over one hundred animals, including dogs, hippos (including a baby),hartebeest,  elephants, baboons and various wildcats. The animal burials are in the city’s elite cemetery, where rulers and their family members were interred.  The expedition’s results indicate the city’s powerful rulers kept the animals in captivity, almost as in a zoo. For example, a 10-year-old male elephant had eaten twigs from acacia trees as well as wild and cultivated plants from varied environments, suggesting it was being fed by humans.

Queen Hatshepsut was known to have kept baboons and other animals imported from the land of Punt (somewhere in the Horn of Africa) during expeditions and trade exchanges. In her time, around  1508 BC,  the royal zoo most likely included rhinos, giraffes, leopards, monkeys and more familiar species like cattle and hounds.   In his Upper Egyptian menagerie two hundred years or so later, Pharoah Akhenaten (husband of the famous and beautiful Nefertiti) kept lions in domed buildings, antelopes in pens and cattle in an enclosure made of sticks and branches. There was also a pond, which it seems logical to assume featured fish and water birds.

Nothing is ever simple and straightforward in Ancient Egypt, however; it is believed that the Pharaohs not only kept these fascinating animals for the enjoyment of looking at them but also as a symbol of power. By owning and controlling these large, exotic creatures, Pharaoh could lay claim to having assumed their strength and powers for himself.

And possibly amuse one small, fussy boy on a lazy afternoon!

Veronica Scott grew up in a house with a library full of books as its heart, and when she ran out of things to read, she started writing her own stories. Married young to her high school sweetheart then widowed, Veronica has two grown daughters, one young grandson and cats. Her novel Priestess of the Nile, which tells the tale of forbidden love between Sobek the Crocodile God and the beautiful priestess Merys, can be found at  Carina, Amazon or Barnes & Noble and is available as an ebook or an audio book.