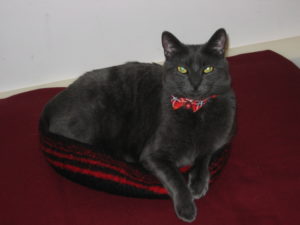 Murky handsome in his prime. 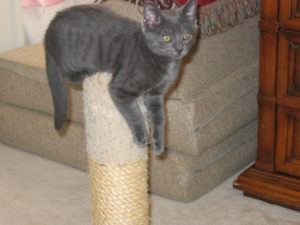 Murky as a kitten. He still had stripes then.

Our life with Mercury was a series of the best mistakes we ever made.

We got him because we thought our older cat might like the company of a kitten. That was mistake number one. Mistake number two is that I saw an advertisement from an allegedly responsible breeder. She told me she had a dark grey kitten, but I was adamant that I didn’t want him. I wanted another orange tabby, and she said she had one of those. Our first clue that this wasn’t the most legit arrangement was when a German lady agreed to meet us and give us a kitten out of the back of the van in a Petco parking lot for a fee of $50. We were dumb and naive and fell in love–not with the orange tabby, but with a dark grey kitten who, upon being picked up for the first time, licked my husband’s nose. We tried to play with his siblings, but he was determined that we should have eyes only for him: a recurring theme in his life.

The lady told us he was “Wunderbar” and we agreed.

So we took him home, and he was remarkably chill for a kitten in the car. He was equally chill at the Petco where we picked out toys and food and other goodies for him. He was still happy-go-lucky when we stopped off at my sister’s house so she could meet the kitten. He fell in love with her and vice versa. He acted right from that first moment as if he had picked our family out and not the other way around.

That night, as per advice, we put him in a bathroom by himself so that he wouldn’t be afraid, and give him a little clock like the heartbeat of his mom. This turned out to be ridiculous advice. As he would do for the rest of his life he cried and howled and clawed his way to be near us–even using the wall behind the bed to shimmy his tiny kitten body atop the mattress so that he could sleep in the bed between us. Which he did that night, almost every night of his life. He always wanted to be in the middle–sometimes equidistant, sometimes under my chin, sometimes against Adam’s leg, but right up until the end it was best if he was touching us both. 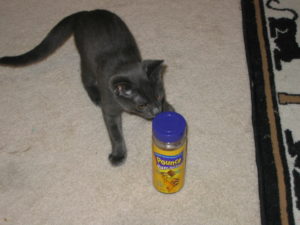 He was so charming I let him get away with basically everything, including kneading with sharp little claws on my belly even when he left a hundred tiny bleeding holes in my skin. It was hard to refuse him when he would head butt and nuzzle me, and lick Adam’s beard or chin. 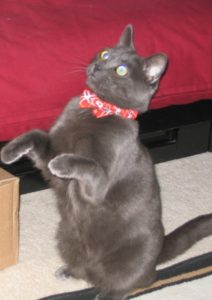 We found out while he was still a kitten that he had ringworm. The treatment was expensive, the vet gave us a well-deserved lecture about getting kittens out of the back of vans and expected, I think, that we would put him down. Instead, we went through two rounds of sulfur baths. He probably used up four of his lives right then and there, upending our lives in the process as we bleached down the entire house and learned to be more responsible cat parents.

We named him Mercury both for his silver toes, like the metal and the fleet-of-foot Greek God who was a younger brother. We called him Murky for short, sometimes Murky-butt, Merc, and Monsieur Mercury. As it happened, Murky wasn’t very fond of being a brother–maybe because his big brother Opie once pushed him off the balcony. He landed safely but dazed, probably using up another life there. And every time we fostered kittens, he was extremely put out. He wanted it known that we were his parents, the bed was his bed, the house was his house, and the sooner they left the better. 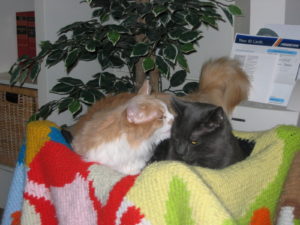 He actually knew all the same tricks Butterscotch does, but would only do them on special occasions because he wanted us to know that he was not our monkey. He also harbored a special hatred for Butterscotch–who is the least hatable cat in creation, and that seemed to annoy Mercury all the more. For ten years, Butters would wake up every morning convinced that this was the day he would finally win Mercury over. 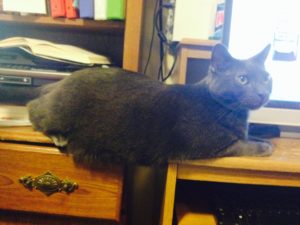 Murky has to be in the middle. Pictured here balancing half on my old desk and half on Adam’s.

Whenever there was cuddling or happiness going on that didn’t involve him, Mercury would do his best to break it up. He hated for us to cuddle the other cats. In fact, he wouldn’t even let Adam and I hold hands unless he was sleeping atop our hands.

Because of this, we started the family joke, “Mercury ruins everything.”

He was both skittish and adventurous. He would run and hide at the sound of the doorbell but once he knew his favorite people were here, he would come out and cuddle. Yet, he also would climb up into the rafters–Adam had to install hard insulation to stop him–and escaped the house once going on a 24 hour adventure in the woods before returning home. He loved to play with fishy toys my mother knit for him, he loved to play “chase” with pounce treats and Greenies, and he even had his own secret games–including one where he’d go into the bathroom downstairs and meow. We think he wanted to play hide and seek with Adam around the corner of the door, but we never quite figured it out. 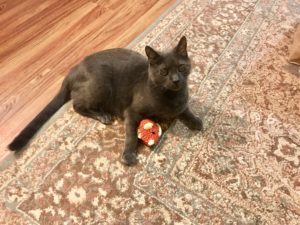 A playful Mercury with his fishy toy.

Last night, even as sick and weak as he was, he made it downstairs one last time to play this game with Adam. I will always treasure this. But he wasn’t strong enough to do more.

Murky has been sick for a long time. It started last year. I was sure he was going to die in my arms. Somehow, after a diagnosis of hyperthyroidism, he pulled through and lived another year. I think he did it just for us and he loved the new rule that he was allowed to eat certain human food off my plate–anything to get food in him. But he kept getting skinnier and skinnier despite medication and treatment. Even when his thyroid was under control, we realized he had lost fully half his body weight. It was heartbreaking to watch him slowly starve to death. Worse, we found out this past week that he had a 6cm tumor in his lung–almost assuredly cancer. He stopped eating and drinking; we forced baby food into him with a syringe, and weirdly I think he knew we did this for his own benefit, even though he hated it. He hated the pills, the poking, the vet visits, it was all too much.

And yet, with the grace of a loving animal, he forgave us everything. Every night this week, we held him down and shoved something down his throat while he struggled, and when it was over, he would simply curl up between us on the bed and purr, trying to make sure that we were both touching him somehow, or that he was touching both of us with his toes and paws.

We made sure to keep the other cats away, and Mercury rallied a few times, but at other times he seemed in pain and gave me an intense stare that I could only interpret as “help me.”  Oh how I wish that I could have. It was agony to decide if we should wait until he was too weak to even purr or lift his head. So haunting not to know when the right time is. But stairs wrecked him, he couldn’t eat or drink and his life was narrowing to only a few waking hours as he slept fitfully in his little bed at the foot of ours, or sleeping between us on our bed while we watched movies together and pet him. 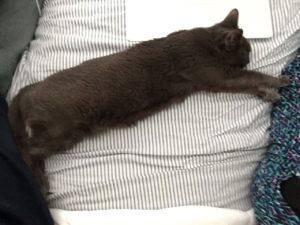 Mercury stretched between us to touch my belly with his paws an Adam with his feet, just hours before he passed away.

Today was almost entirely a peaceful day with him. He spent a little time in the window, then a little time sleeping in a patch of sun, sniffed a little cat nip, and accepted one or two licks of baby food–the latter only to please me before drooping his head again. At one point, he softly stroked my face with his tail. I will always cherish that we had these past exhausting days with him, giving him what he always wanted–to be an only cat who got all our love and undivided attention.

To minimize his fear, we had the vet come to the house and put him to sleep. He hissed and fought the sedative, which just about broke me. Except for that one moment, everything else was soft and slow and we let him fall asleep on the bed between us, the place we started together and the place we ended together.

I can remember a clear “me before Murky” and “me with Murky”… And I know I’ll never be the same “after Murky”, because he really did ruin everything in the best possible way.