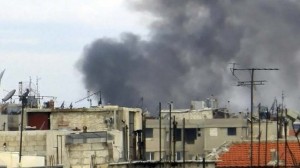 My country is only a few hundred years old.

My countrymen can be insular; even with jet planes the rest of the world seems very far away. And so, when we hear that a tank was captured by rebel forces in Homs it may not register as part of our collective experience. In that, I’m different because I spend all my days writing about the world of Cleopatra’s daughter.

Modern day Homs is the ancient kingdom of Emesa–an integral part of Selene’s parents’ plans for world domination and the place, ultimately, where Cleopatra’s legacy may have been preserved.

The Emesans were extremely religious, their city sacred to a sun god. The royal family of Emesa were priests of that cult. Emesa was a wealthy port city with rich soil perfect for the cultivation of important crops like wheat and olives. It was loyal to Rome and a strategic ally, unfortunately caught up as a pawn in the Roman civil wars.

Two royal brothers split their loyalties between Octavian and Antony. After the Battle of Actium, Prince Alexander (Alexio I) of Emesa was taken captive and marched beside Cleopatra Selene and her brothers in Octavian’s triumph, after which he was executed. In my novel, Lily of the Nile, this is a dramatic moment that affected Selene deeply and would help create a lifelong connection between her and the Emesan royals.

I chose to write it this way because if the line of Cleopatra lasted beyond the death of her grandchildren, it was here, in the kingdom of Emesa where Drusilla of Mauretania (Cleopatra Selene’s granddaughter) is thought to have married into the royal line. Later, another famously powerful queen, Zenobia of Palmyra, would claim to be descended from Cleopatra and if her claim is to be given any credence, it would be through this connection to the Kingdom of Emesa.

Homs is a special city for more reasons than I could list here and so my heart aches to see it as the center of violence in the news today; but if it becomes the place where a successful rebellion is staged in which the lives of women are ultimately improved, I cannot help but think Cleopatra and her daughter might smile just a little bit.