We All Come to the Same Night

by Stephanie Dray | Jun 14, 2021 | Beatrice Chanler, My Works, The Women of Chateau Lafayette 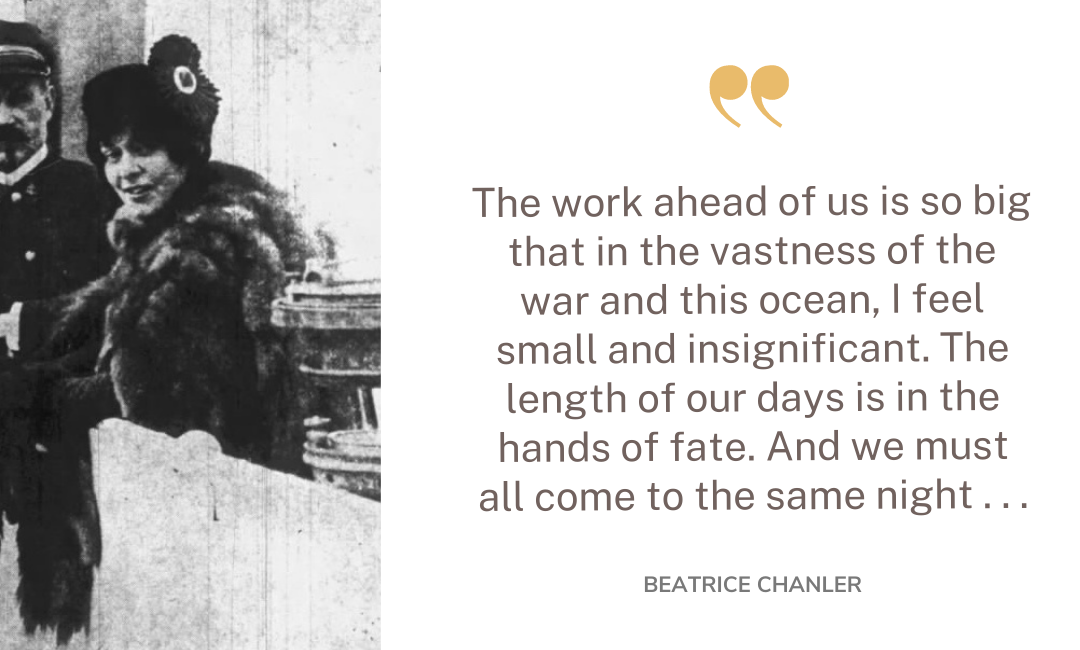 On June 19, 1946 Beatrice Chanler passed away. She was traveling by train with French diplomat Alexis Leger, also known as Nobel prize winning poet Saint-John Perse. The two had spent summers together at her home in Islesboro, Maine since his exile from France after its fall to Hitler.

Before the onset of the war in 1939, Beatrice left Europe and returned to New York ostensibly to spend the holidays with her sons and to work on a new biography of Isabella of Portugal. After having been decorated for her heroism in 1919 during the First World War, she had every right in the world to hang up her spurs and pursue her private ambitions. But by November of 1941, she was back in the office in mid-town New York, saying, “When I look at the state of the world today and the books it already has, I think it is better to make a positive contribution to the living than to literature. It is impossible at this moment for any intelligent person to be interested in his own personal life and plans.”

She threw herself into war-relief work for the second time, working not only for the benefit of her beloved Lafayette preventorium in France, but also leading two war-relief organizations and serving on the committees of five more. She was particularly involved in helping Greece, which had been invaded by the Axis Powers in October of 1940. Her tireless efforts did not stop even with the allied victory… after the Second World War was won, Beatrice went on to serve as Vice Chairwoman of The National Citizens’ Committee in Aid of the United States War Crime Commission—advocating a strong response to Nazi crimes against Jews, and championing Jewish Congressman Emanuel Celler, a critic of America’s insufficient response to the Holocaust.

What business she was about on her last ill-fated train ride to New York, I cannot be certain. I think it possible she was going to meet her dear friend Emily Sloane for their long-awaited reunion after the war. She perished of a heart-attack en route. She was decorated a second time, posthumously, for her service to Greece.

The work ahead of us is so big that in the vastness of the war and this ocean, I feel small and insignificant. The length of our days is in the hands of fate. And we must all come to the same night . . .

She never did finish the last book she was working on, but she was anything but insignificant. While it’s true that we must all come to the same night… only some of us live so boldly in the light.