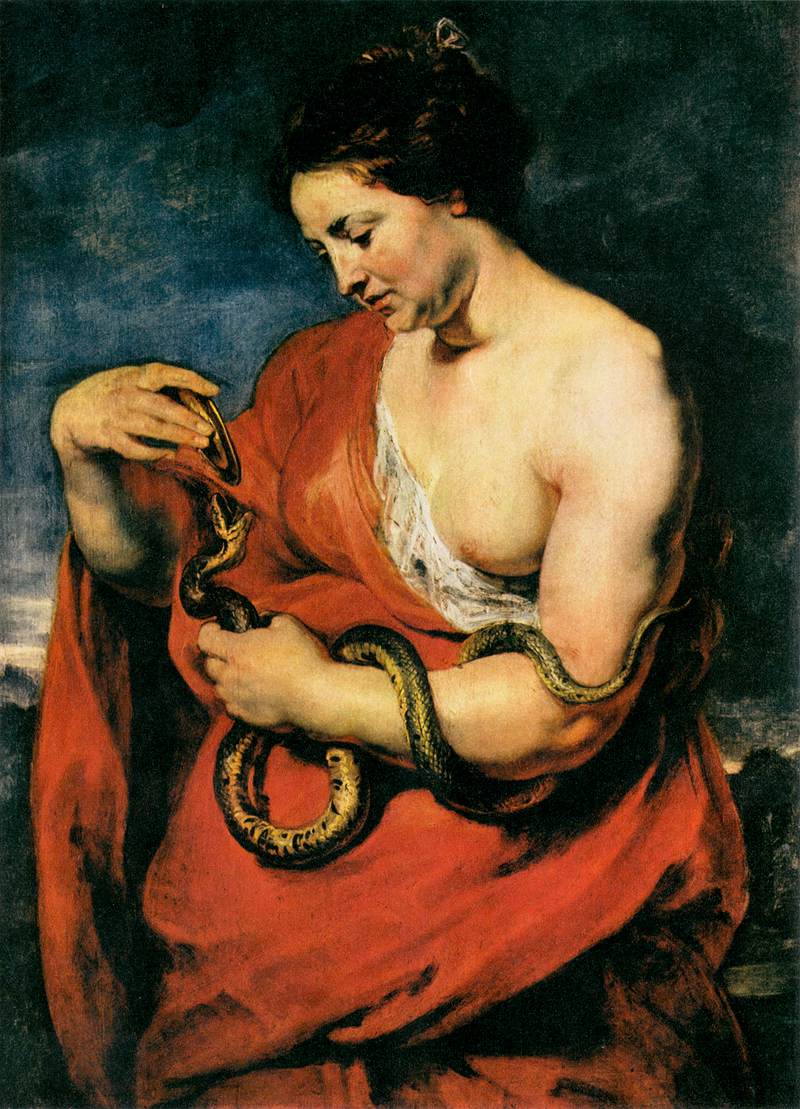 The heroine of my novels, Cleopatra Selene, is the daughter of the much more famous Cleopatra VII of Egypt, the notorious Queen of the Nile who is best known for having committed suicide by way of clutching a venomous serpent to her breast. There is some debate over whether or not the story is true, but the legendary iconography remains.

The idea that Cleopatra was a seductress, a wicked woman who lured good Roman soldiers to their deaths, fits in with the Judeo-Christian idea of both women and serpents. The bible presents the snake to us as an object of wicked temptation, luring us to offend the divine order of the universe. But this Judaic view of the serpent is only one of the perspectives in the ancient world.

To the Egyptians, the cobra was a sacred animal that represented the ancient cobra-goddess Meretseger, who guarded the tombs of pharaohs. Another cobra-goddess was Wadjet, who was a guardian and protectress. The symbol of the cobra was so closely associated with the idea of royalty and the right to rule that it would become part of the official crown in the form of the uraeus, an icon of royalty that Cleopatra adopted herself. In fact, she chose three–one serpent to represent herself, her son Ptolemy Caesarion and the Roman man she claimed was her husband, Julius Caesar.

If Cleopatra did choose to die by the bite of a cobra, it would have been a highly symbolic political act–one that declared her the rightful ruler of Egypt, at one with the old gods of Egypt, and immortal.  (The shedding of skin helped to perpetuate the image of the snake as an immortal animal.)

Despite her mother’s association with snakes–or perhaps because of it–Cleopatra’s daughter seems to have eschewed their symbolism in favor of crocodiles. However, she was likely to have encountered snakes in the Kingdom of Mauretania, where she was sent to rule. Snake charming was a popular entertainment in the ancient world and ancient magicians were said to be able to turn staves into snakes.

Snake charming, then as now, was accomplished by way of training a serpent, then pretending as if the music has hypnotized the dangerous animal. In reality, most of these performing snakes had their mouths sewn loosely shut or their fangs removed. However, the reputation of the charmers was often strong enough that they were called upon to rid villages of dangerous snakes.

But even if the Hellenized Queen Cleopatra Selene hadn’t been impressed by the reverence of Egypt for the snake, or by the snake charmers of North Africa, she would still have had to contend with the Greek idea of serpents.

In Greek mythology, the serpentine caduceus is a staff held by Hermes, who was a messenger god, a guardian of commerce, a protector and a guide to the dead. This symbol of the caduceus is often mistaken as a symbol of healing because it is confused with the single serpent and rod of Asclepius, the Greek God of medicine and healing. The shedding of snake skin represented for the Greeks a rejuvenation of the body or spirit. The serpent itself is also a representation of the dual nature of a physician who deals with both life and death. Because of this, the serpent was a highly respected animal in ancient Greece and figured prominently in mystery cults. Even the mother of Alexander the Great was said to keep serpents as pets and was rumored to have been seduced by Zeus in the form of a snake.

With the image of the serpent so prevalent throughout culture and mythology, it’s no surprise Cleopatra Selene was depicted wearing a snake armband on the cover of Song of the Nile!