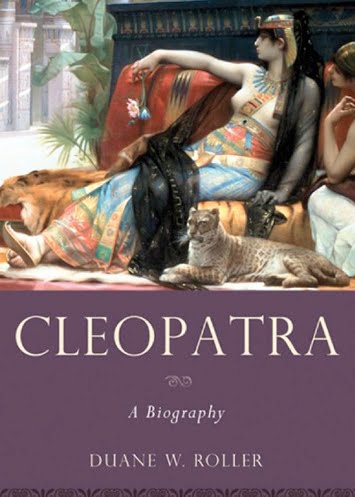 Just when you thought everything that could possibly be written about the Queen of the Nile already had been, Duane Roller brings us a fresh new take. This scholarly work reads with the ease of a novel and even veteran students of Cleopatra will learn something new about history’s most fascinating woman.

Cutting through the Augustan propaganda that has largely defined our contemporary view of Cleopatra as the wanton seductress and plaything of Roman generals, the book examines her skills as a linguist, diplomat, author, and naval commander. Roller does not portray her as a superwoman–after all, the Egyptian queen’s plans did ultimately fail. But neither does he minimize her talents and accomplishments.

What emerges from the impeccably researched pages is a complex portrait of a woman who very nearly ruled the world. But lest we think she was all ambition, the book explains in detail that her first concern was always Egypt. Indeed, Professor Roller observes, “a failure to understand her essential needs was a constant misjudgment by the Romans.”

In this book, we learn about Cleopatra in the context of the revolutionary times in which she lived as well as in the context of the legacy she inherited from her ancestors. But amongst the most enlightening revelations is a reference to Cleopatra’s possible Egyptian blood and her relation to the priestly family of the god Ptah. It’s become fashionable to dismiss Cleopatra’s self-styled title of Philopatris and her learning of the Egyptian language as some sort of Egyptomania peculiar in a Greek queen. But if Roller’s hypothesis is correct, then Cleopatra represented in her very person the merger of the Macedonian ruling class of Ptolemaic Egypt with the native people they ruled.