Lafayette We Are Here 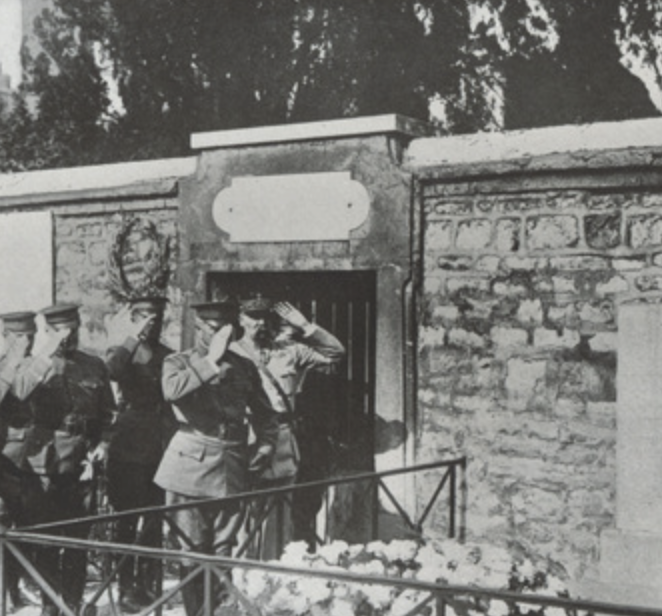 The Marquis de Lafayette was not only instrumental in helping the United States to win independence; his memory also played a role in America embracing her destiny as a world power. On July 4, 1917, General Pershing and his staff visited Lafayette’s tomb at Picpus Cemetery in Paris.

On that occasion was present Valentine Thompson and Clara Simon, women who were friends of Beatrice Chanler’s and instrumental in the French Heroes Lafayette Memorial Fund that purchased the chateau at Chavaniac. Through their efforts, the chateau was re-envisioned as a shelter for sick, orphaned and displaced children. Eventually, more than 25,000 desperate children were saved there, including some hidden during the Holocaust.

Of course, General Pershing and his staff couldn’t have known about that at the time. What they did know is that women were turning out to be instrumental in winning this war, as they had been in so many wars before. At this ceremony tribute was made not just to Lafayette, but also to his wife Adrienne. As I explore in The Women of Chateau Lafayette, there was an explicit acknowledgement that the world now needed “a thousand Lafayettes.”

And to underscore the importance of our Alliance with France, our first friend and sister republic,  Lt. Colonel Stanton poignantly said, “America has joined forces with the Allied Powers, and what we have of blood and treasure are yours. Therefore it is that with loving pride we drape the colors in tribute of respect to this citizen of your great republic. And here and now, in the presence of the illustrious dead, we pledge our hearts and our honor in carrying this war to a successful issue. Lafayette, we are here.”