The duc de Chartres was ten years my senior and a puckish mischief-maker who often goaded the queen and her ladies into drunken carriage racing in the streets. I did not wish to encourage him. Still, with the queen’s prodding, I agreed to dance. When he extended an arm, I rested my fingertips upon it. “Your Serene Highness—”

“You must call me Philippe.”

Surprised that he knew my given name, I dared a glance into his lupine eyes. “We are scarcely acquainted.”

“Give it time, and perhaps we shall become good friends.”

I gave a slow wave of my painted fan, meant to warn him off. “What more could you wish?”

“I like your sleepy bedroom eyes,” he said, leering. “Though someone should have told you to pluck those brows . . . it makes a man worry the hedges are not trimmed below.”

Aghast, I drew back. “Forgive me, but I feel suddenly unwell.”

My instinctive horrified reaction seemed to give him the greatest amusement, and he put his hand atop mine, holding fast. “A word of advice, poppet—take care not to be too saintly. Your husband is already an object of mockery at court, and you should not like to join him.”

How dizzied I suddenly felt by the musicians and the dancers swirling in lace and brocade. “What has Lafayette done to merit mockery?”

“You’re an angel to pretend you don’t know your father saddled you with an oaf from the mountains who can’t even drink without his knees wobbling.”

He laughed at my husband’s expense as if he expected me to join in. Then he gestured to where my husband gazed out the window. “Look at him standing at the edge of the dance floor like a dunce. I doubt Lafayette’s name is on a single dance card. Perhaps he devotes himself to you. Perhaps to God. Either way he courts resentment, and makes you both seem like children.”

Truly, I felt like a child trying to fend Philippe off. “Please release me.”

His grip tightened. “Only if you promise to be sweeter to me next time we meet. A dull husband need not keep you from blossoming; with my help you could bloom into a rare flower indeed.”

I did not promise, but pulled away knowing I could not share this conversation with anyone, lest my husband be humiliated and my father enraged. What’s more, there was no escape from my unease in moonlit gardens, with fireworks overhead, or even watching the card games that went late into the night, for this was a world filled with men just like Chartres. We could be wary of the decadence and corruption of Versailles, but every day, we became more a part of it. And all the while, my husband seemed to lapse more into silence, both at court . . . and at home.

“Is the Lafayette boy mute?” Grandmere asked at breakfast, tapping her ear trumpet.

“Grandmere,” I said, trying to distract her with a buttered roll, “Monsieur de Lafayette is not yet accustomed to such garrulous society as ours.”

We were, after all, an imposing family. But I startled to see my new husband slip marzipan into his pocket like a beggar. Did he grow up hungry as a boy at Chavaniac? “Gilbert,” I whispered over the porcelain tea service. “You may call upon servants for marzipan whenever you wish.”

He colored. “It’s for my horse. An experiment.”

This attracted the notice of the duc d’Ayen from the far end of the table, for in addition to his duties at court, my father was an avid scientist, with a laboratory in Paris and a deep interest in chemistry. “What manner of experiment?”

Gilbert’s color deepened, as if he feared mockery, and several long moments passed in silence.

“The boy is mute!” Grandmere crossed herself. “Why weren’t we informed of this during the wedding negotiations?”

“Impudence!” cried my aunt, Madame de Tessé, but she grinned, for she read Rousseau and Voltaire and fancied herself quite a philosopher.

Gilbert seemed to fancy himself one too. “No creature should yield easily to cruelty.”

My father rolled his eyes heavenward. “You mean to coddle your mount and see how he behaves? You’ll ruin a stallion that way.”

Gilbert lowered his gaze in apparent deference, but before he did, I saw a storm of defiance in his eyes— storm that both thrilled and worried me. Later, in the quiet of the bedchamber, where my husband and I shared sweet and gentle intimacies, I broached the subject. “Gilbert, why shy away from conversation at court?”

“Because no one there talks of anything worthy of discussion.”

Perhaps this was true, and I could scarcely blame him for disdaining the games of gossip both light and fatal. Still, it seemed unpardonably prideful to hold ourselves above our social betters. “You might raise interesting subjects. You speak to me so knowledgeably about Voltaire and the old Romans . . . about whether God exists, and if he does, in what form . . .”

“That is because you are sincerely interested. Whereas everyone else only wishes to seize upon what I say to ridicule. To them I will always be a nobody from Chavaniac.”

He was wrong; his marriage to me, his association with the Noailles, made him a somebody. And we were invited to every royal function. By winter my brother?in?law, Marc, had been welcomed into the ranks of the Society of the Wooden Sword, and he obtained an invitation for Gilbert— an invitation my father said he must accept. Gilbert joined, but soon vexed my father for participating in their antics. “What could he have been thinking?”

“It was only a performance to amuse the queen,” I said in my husband’s defense. “The king’s own brothers took part.”

They too had stood upon tavern stools to parody stodgy old nobles. Yet it was Gilbert who had unexpectedly stolen the show with his impersonation of a mean-spirited judge, skewering the judicial system in France that sent peasants to be tortured, broken, or burned alive.

The queen had been as surprised as she was delighted by his audacity, for she thought the performance to be a clever mockery of the Paris Parlement which, in royal opinion, got above themselves. Yet when the word got out, the judges understood my husband to be criticizing the system itself, and now my father ranted, “I cannot rouse my son?in?law to impress important men at court who matter. No, when I need Lafayette to speak, his tongue is tied. Yet he makes a spectacle of himself to amuse the Austrian wench—”

How grateful I was that Maman took up for my husband. “Father, you have always said there can be no more important opinion than the king’s, and when the king heard about this, he laughed.”

This my father could not deny. Instead he strode away, and having never got the better of my father in an argument before, I felt the need to make amends. Thereafter, I encouraged my husband to join the sleighing parties, to play billiards in the royal chambers, to drink with the king’s courtiers—but to stay silent on matters of politics.

On Christmas Eve, Lafayette had to be carried back to the house by servants. “Tell the vicomte de Noailles how much I drank!” he shouted, then promptly vomited in a washbasin. I knew then how desperate he was to be accepted. Almost as desperate as I was for my father’s approval.

Riddled with guilt, I wiped his brow with a cool cloth. And like a dying man yearning for home, Lafayette groaned, “I want to go to Chavaniac.”

“I imagine it’s dreadfully cold there this time of year,” I said.

“Yes, but it’s the best time. We slaughter a pig, and on Christmas Eve the family gathers round a loaf of brioche on a pretty table—”

“Only one loaf?” How poor even the nobles of Auvergne must be!

“It’s our custom. The brioche is more candleholder than bread. From oldest to youngest, everyone takes a turn lighting the candle, making the sign of the cross, then snuffing it out.”

I couldn’t imagine it. Such a ceremony would last days at court. “Why snuff it out?”

Drifting to a drunken sleep, Lafayette closed his eyes. “Because the world always snuffs out fire, and every generation must bring light from darkness again.”

For another excerpt, see Frolic. 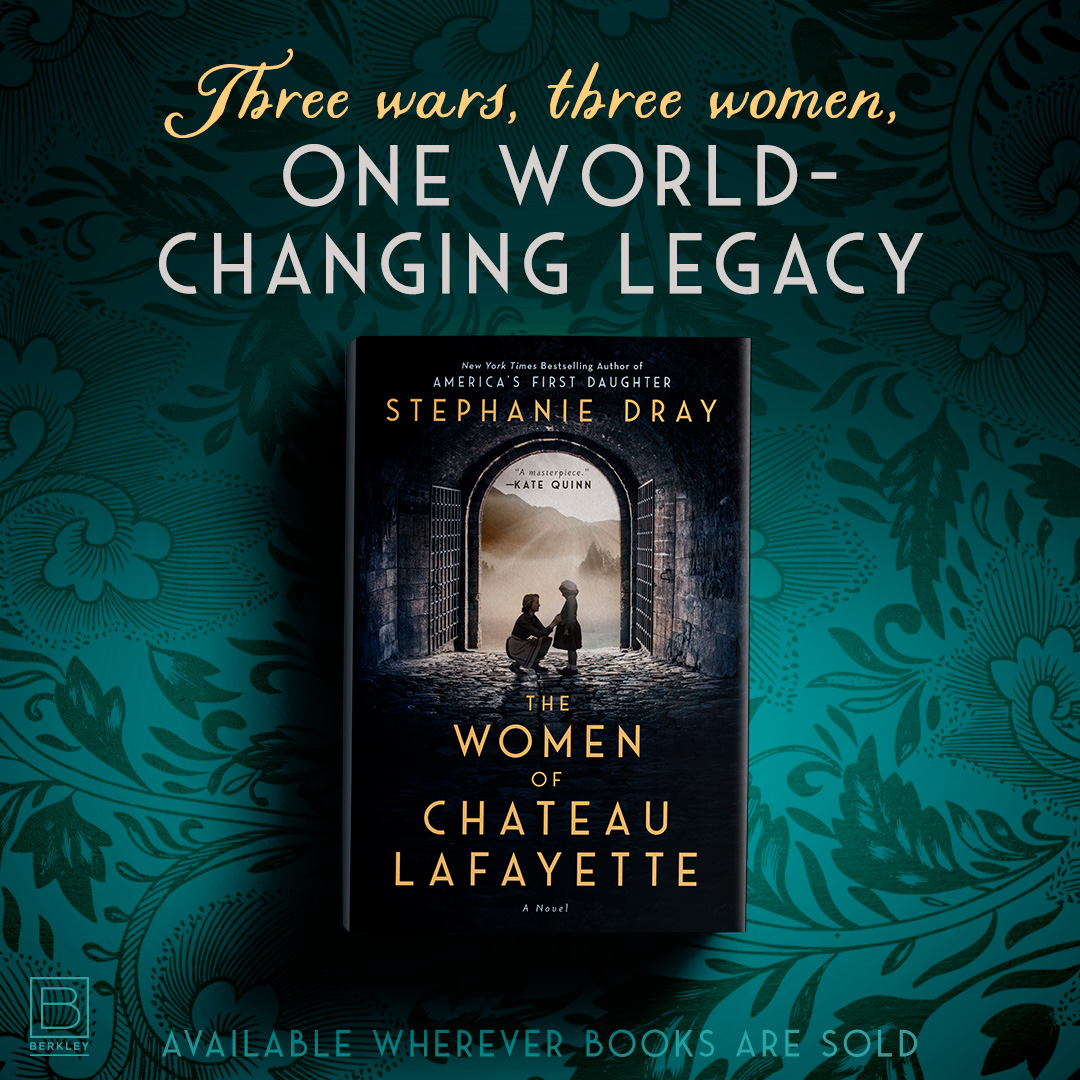 I'm so thrilled to announce the release of my newest novel, a labor of love, The Women of Chateau Lafayette.  ABOUT THE BOOK  An epic saga from New York Times bestselling author Stephanie Dray based on the true story of an extraordinary castle in the heart of France...
Read More 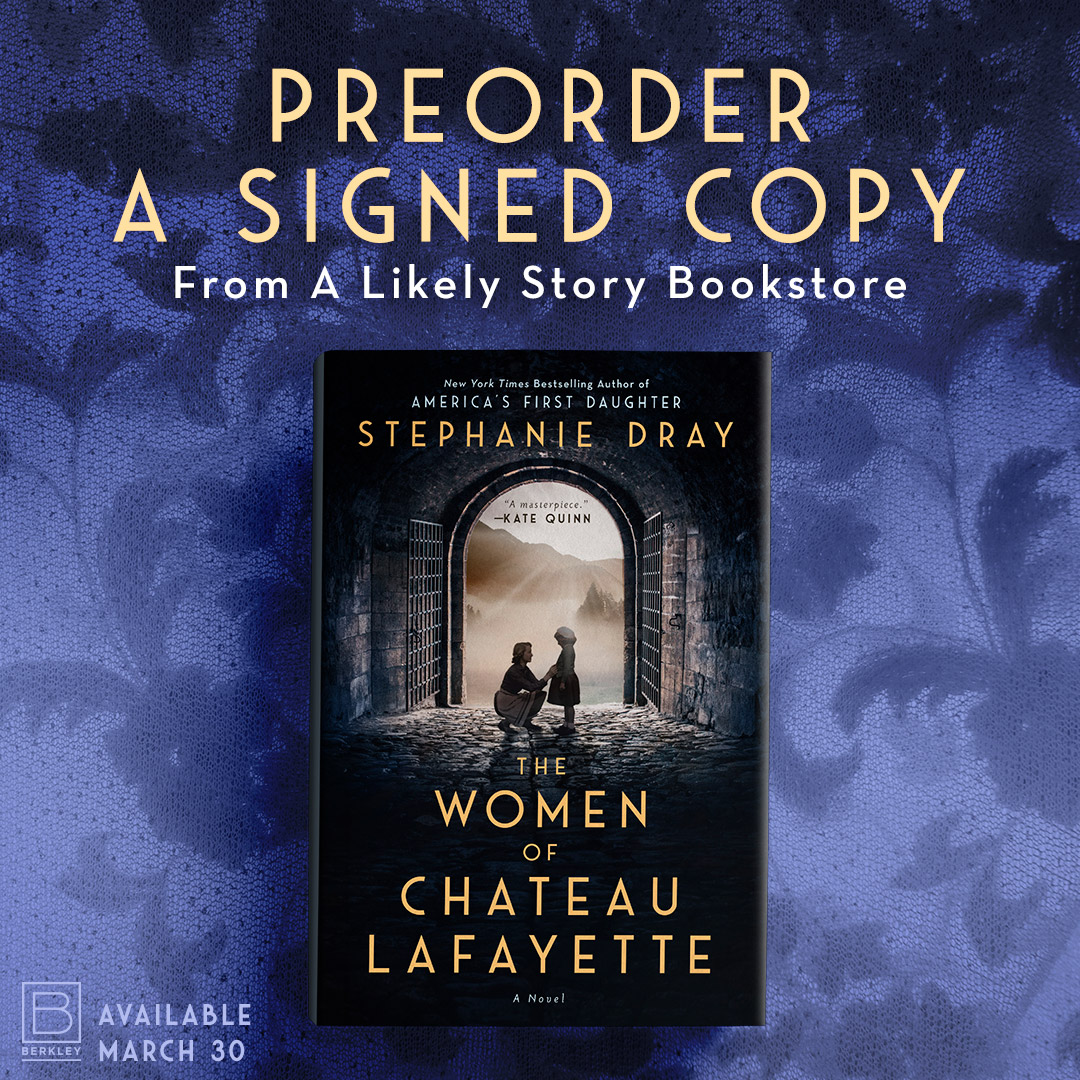 I know it's tough to get signed books these days, but I've paired up with A LIKELY STORY BOOKSTORE and if you'd like a signed copy of THE WOMEN OF CHATEAU LAFAYETTE, you can pre-order it here: https://buff.ly/2JaCNLS You'll get a special gift enclosed. While you're...
Read More 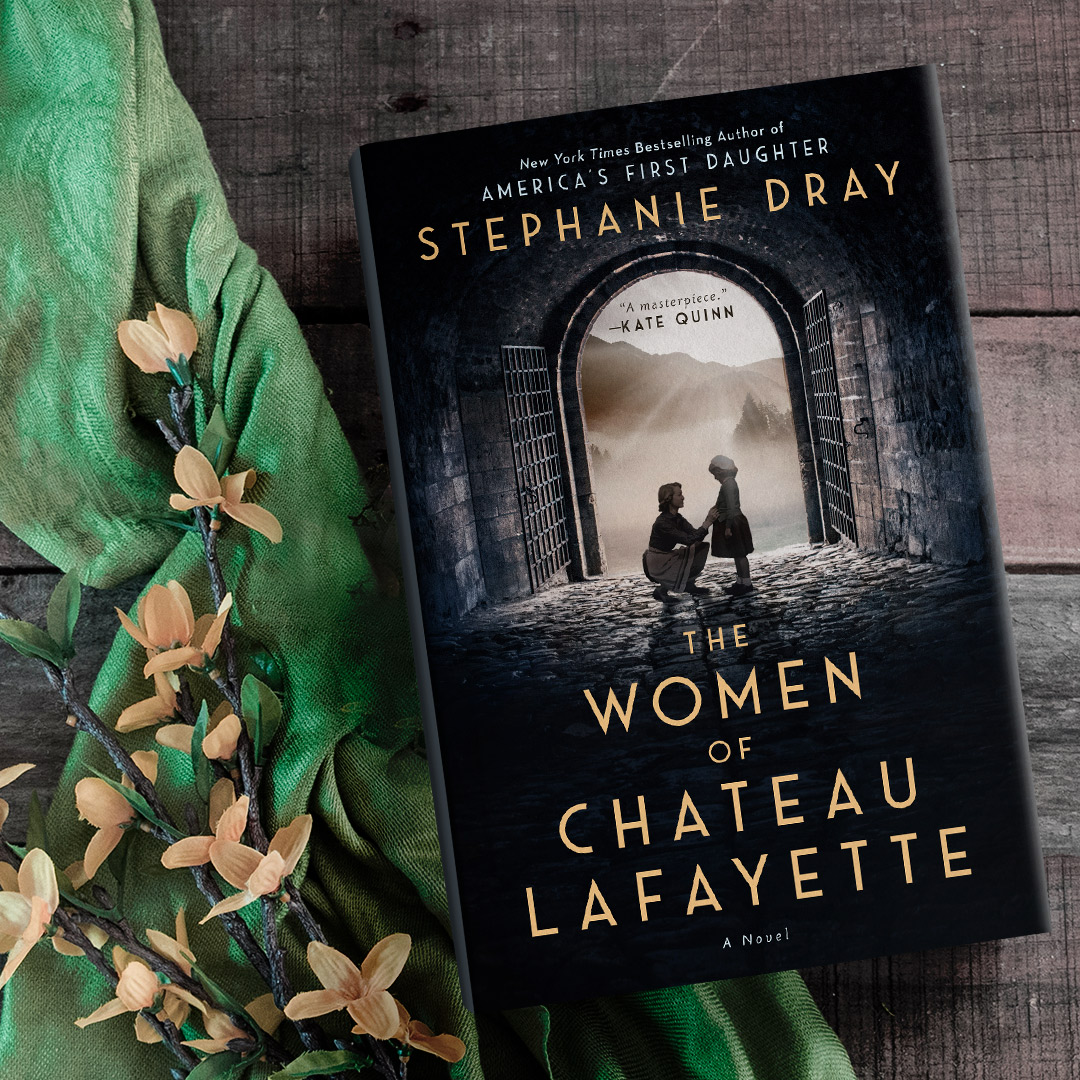 I'm so delighted with and honored by this review in the Jewish Journal. In Stephanie Dray’s ambitious historical novel, “The Women of Chateau Lafayette,” the chateau is a character unto itself... A particularly moving moment is when the daughters of a slain WWII...
Read More

Stephanie Dray’s latest gets a shoutout from the AARP

The AARP jotted off a list of "our favorite new and soon-to-be released compelling wartime novels" and The Women of Chateau Lafayette is on the list!
Read More 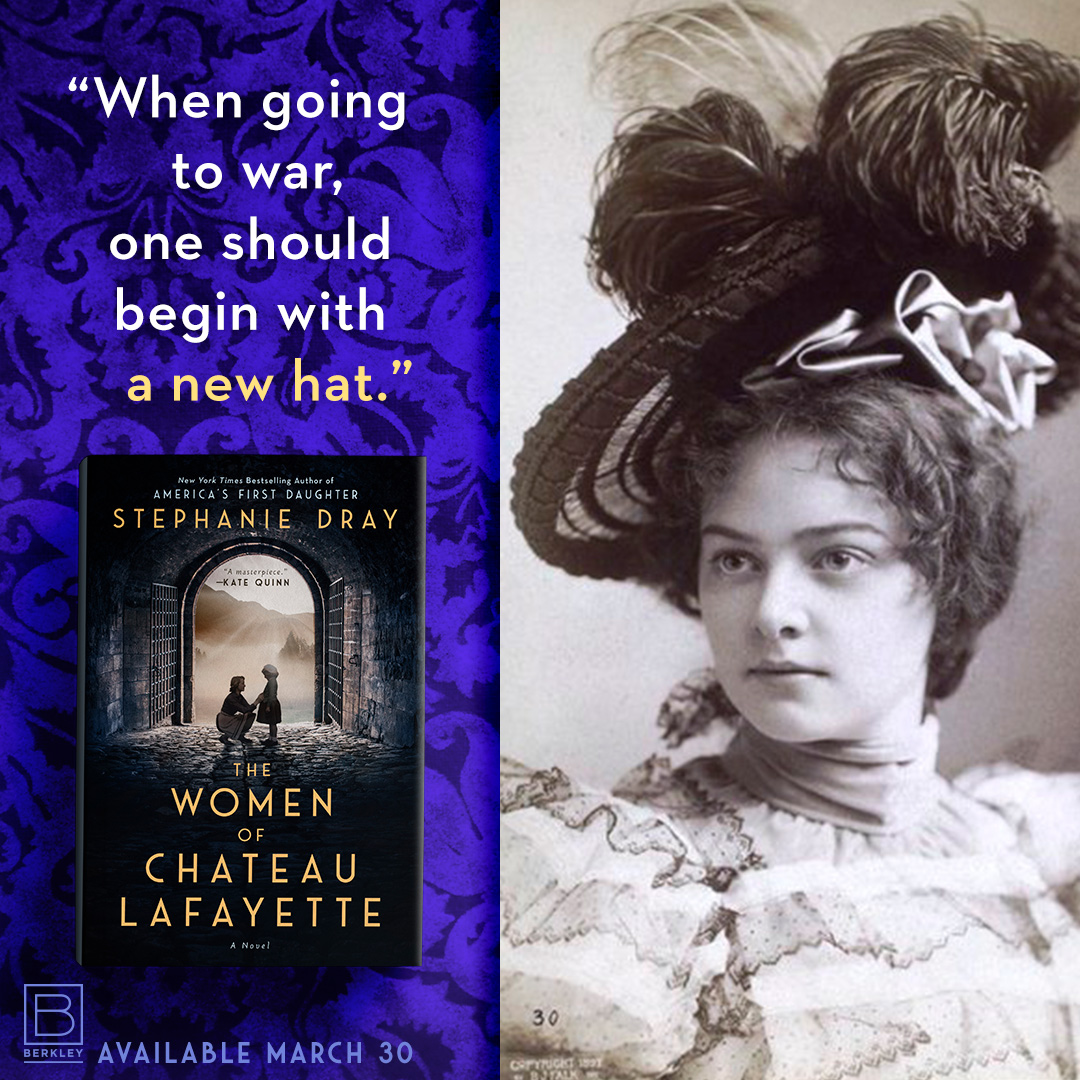 While writing The Women of Chateau Lafayette, the research kept shifting under my feet, in part due to what I discovered in Beatrice's private letters, provided to me by her grandson William A. Chanler, partly due to what I found in her papers at the New York...
Read More